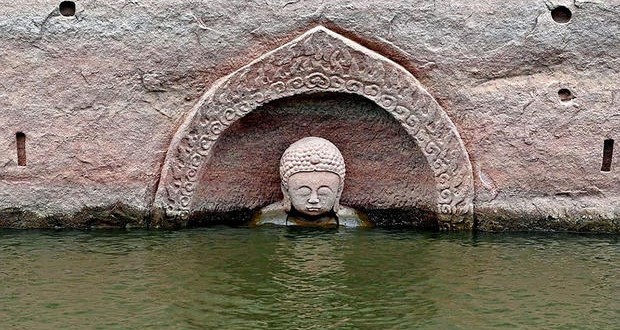 The head was spotted at Hongmen Reservoir, Nancheng County in the city of Fuzhou, at the end of last year when a hydropower gate renovation project lowered water levels in the reservoir by more than 10 meters, Joinfo.com reports with reference to Xinhua news agency. Judging from the head design, the statue was carved during the Ming Dynasty (1368-1644), said Xu Changqing, head of the provincial research institute of archaeology.

He said that the researchers had also found rectangular holes carved on the cliff, obvious marks of architecture, which meant that a temple could have existed there. Sonar equipment and other devices will be used to get the basic data and underwater images for further research.

Hongmen Reservoir, also known as Zuixian Lake, was built in 1958. Spanning Nancheng and Lichuan counties, the reservoir has a water storage volume of 1.2 billion cubic meters.

According to county records, the reservoir is located on the ruins of the ancient Xiaoshi Township, an important hub for water transport between provinces of Jiangxi and Fujian and also a trade center.

The detection project led by the State Administration of Cultural Heritage will last from Thursday until Sunday.