Shares
The remains of three ‘high-end’ Roman urban buildings have been discovered by archaeologists under the park in the West Sussex town center. 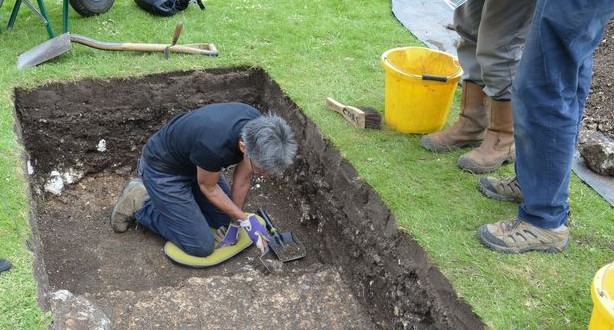 The intact footings of two town houses and a third building that could be anything from an outhouse to a high-status dining room had lain undisturbed for up to 1,600 years before they were found using ground-penetrating radar in Chichester, Joinfo.com reports with reference to iNews.

The discovery of the large masonry houses and the unusually shaped third structure with a rounded end is being hailed as significant because it is rare to find Roman remains that have been so well preserved in a town or city setting.

Chichester town has long been associated with the Roman era, serving as a fortress for Rome’s legions shortly after the invasion of Britain in AD43 before becoming an important residential and industrial center.

Archaeologists believe the new remains may have belonged to some of Chichester’s better off Roman denizens and could further our understanding of how these early British urbanites lived. James Kenny, archeologist for Chichester District Council, said: “It’s quite remarkable to find Roman houses which are so complete in the setting of a currently occupied city. They have survived because they are under a park that has hardly been built on in the intervening period.

“What is intriguing is that they are at what you might call the posh end of the Roman town. We don’t know exactly what is underneath yet but the third building is particularly intriguing. It could be a bath house or a high-status dining room or just the place where they kept the pigs. We’ll only find out what exactly is there if we can carry out an excavation.”

Mr Kenny said: “The location marks what may have been one of the more affluent parts of the Roman town, with these houses being the equivalent to a property worth millions of pounds in today’s society.

“The two houses have walls surrounding complete rooms, which are set around a courtyard or atrium. There is also a deep masonry building with a rounded end. We are intrigued to find out what this building is.”

The houses were discovered last year after a local enthusiast was given permission to use ground-penetrating radar to explore Chichester’s Priory Park. The readings revealed the intact outlines of two houses just 50cm below the surface with their footings surrounding complete rooms and set around a courtyard or atrium.

An exploratory dig last year confirmed the find, unveiling roof tiles fragments and pieces of mosaic. Archaeologists now hope carry out a further test dig before applying to the Heritage Lottery Fund for funding to carry out a full excavation.

Mr Kenny said: “We would like it to be a community project so people can get involved and understand these buildings. But the idea at this stage is not that we will keep the remains on permanent display. Once they have been uncovered and fully examined we will return the ground to its current state.”