Scientist found way to stop tsunamis in their tracks

Shares
The pressure of deep-ocean sound waves could be used to stop tsunamis in their tracks, researchers have found, by dissipating their energy across wider areas and reducing the height and speed of these monster waves before they reach land. 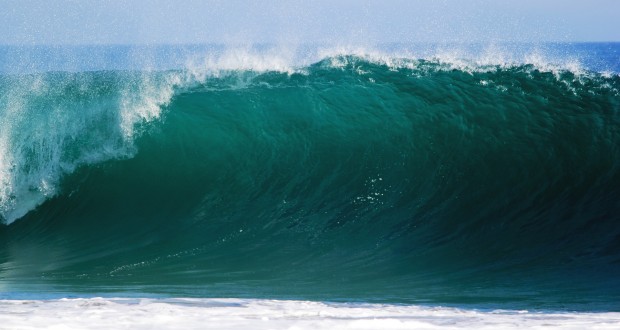 Tsunamis – which can be caused by earthquakes, landslides, or any sudden release of energy underwater – are capable of devastating coastal regions when they hit land, and right now, there’s not much we can do to stop them. But mathematician Usama Kadri from the University of Cardiff in the UK thinks acoustic-gravity waves (AGWs) could be the solution, Joinfo.com reports with reference to Science Alert.

Acoustic-gravity waves occur naturally in the oceans, cutting through the water at the speed of sound, and Kadri says controlling these waves could give us a way of reducing a tsunami’s momentum.

“Up until now, little attention has been paid to trying to mitigate tsunamis and the potential of acoustic-gravity waves remains largely unexplored,” says Kadri.

AGWs can stretch for hundreds of kilometers, and travel many thousands of meters, and it’s thought that plankton (which can’t swim themselves) rely on these waves to move around and find food. Kadri has previously suggested that these AGWs could act as early-warning systems for tsunamis, as they often precede these massive waves.

According to Kadri, the power in these sound waves is also enough to dilute the strength of an onrushing tsunami, so most of its energy would be used up before it reaches land.

The hypothesis is based on calculations of how energy could be transferred and dispersed underwater, and draws on Kadri’s previously published work on the physics of these AGWs.

Now, all we need is a way to engineer and control these sound waves – something Kadri hasn’t covered in his sums.

The best way to tackle this could be to somehow harness the AGWs created naturally by tsunamis, Kadri says. Essentially, we need to figure out how to fire some the energy created by a natural disaster back in the other direction.

For the time being, Kadri’s calculations are just a proof-of-concept, but if we can get the idea to work, there’s the potential to save many lives, and lessen the risk of large-scale chaos.

Take the 2004 Indian Ocean earthquake and tsunami, for example, which was estimated to be responsible for the deaths of more than 200,000 people, as well as widespread damage to local communities and ecosystems.

It might be a while before we have anti-tsunami stations dotted around the coast, but this research suggests that they could be feasible, and potentially adjusted to suit each incident as well.

“One could adapt the mechanisms presented here to account for other violent geophysical processes in the ocean such as landslides, volcanic eruptions, underwater explosions, and falling meteorites,” explains Kadri.

“While the scales involved may differ in each process, the underlying physical processes involved are similar.”

The findings have been published in Heliyon.