Miss France Has Been Crowned Miss Universe in the Philippines

Shares
A 23-year-old dental student from France won the Miss Universe crown Monday in the annual pageant held this year in the Philippines. 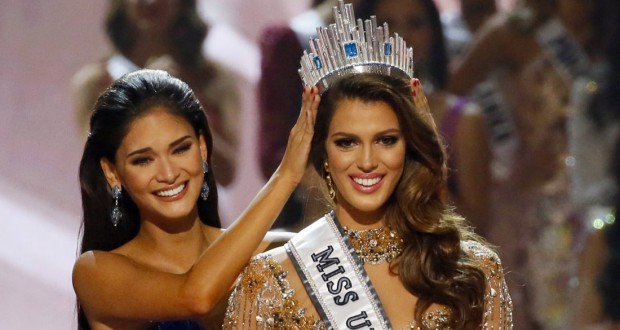 Iris Mittenaere from the small town of Lille in northern France said in reply to a final question from pageant host Steve Harvey that she would be honored if she just landed among the three finalists, but was visibly stunned when she was announced the winner among the field of 86 contestants, Joinfo.com reports with reference to Time magazine. Mittenaere was speechless and put her hands on her face as the outgoing winner from the Philippines, Pia Wurtzbach, crowned her as the crowd erupted in cheers and applause at the packed Mall of Asia Arena by Manila Bay. In her profile, she said she would “advocate for dental and oral hygiene” if she takes home the crown. In the final question to the top three finalists, the candidate were asked to cite a failure in their life and explain what they learned from the debacle.

“I’ve failed several times in my life,” Mittenaere said without elaborating but added that “when you fail, you have to be elevated and you have to try again and keep going … I have failed before but for me this is the great first opportunity.”

Miss Haiti, Raquel Pelissier, a 25-year-old survivor of the devastating 2010 earthquake that destroyed her hometown, was named first runner up while Miss Colombia, 23-year-old, Andrea Tovar, was second runner up.

“I survived the earthquake,” Pelissier said in reply to the same question, citing the quake the Haiti government estimated to have killed more than 300,000 people and displaced more than 1.5 million others. “I felt I was failing myself because I was not living my dreams … But I chose to be a very positive person, and learned a great lesson from it because if I am here today, it is because I am living my dreams.”

As he closed the ceremony, the American comedian host declared: “This is Steve Harvey, I got it right,” referring in jest to his mistaken announcement of Miss Colombia as the winner in the last pageant in Las Vegas more than a year ago that sparked an uproar.

Miss Kenya, Mary Esther Were, went on a bizarre rant when asked to comment on Donald Trump’s Presidency, according to the report: