Home / World / Sharks could be key to finding cure for cancer

Sharks could be key to finding cure for cancer 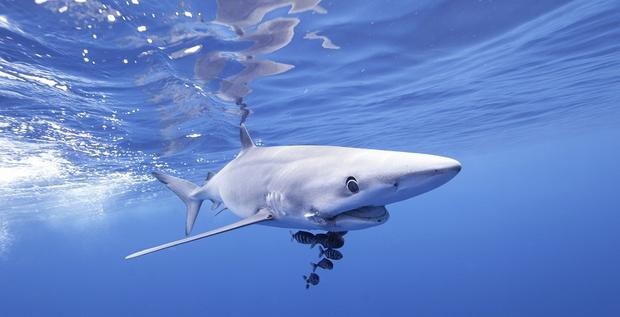 Researchers with Nova Southeastern University (NSU) and Cornell University have reported in a new study in the journal BMC Genomics that key genes related to the shark’s renowned immune system have changed with evolution, Joinfo.com reports with reference to Seeker.

Sharks are considered unusually good at healing their wounds and are also suspected to be uncommonly resistant to cancer. The genetic changes, the scientists say, may help explain the fish’s notoriously hardy nature and could one day help humans in their struggle against cancer.

The scientists studied the genomes of rays and sharks that included great whites and hammerheads. They found two shark immunity genes in particular – known as legumain and Bag1 – had changed over time with natural selection. Those genes, they say, have their analogs in humans, and when they “overexpress” in people they have been associated with a number of forms of cancer.

“It’s intriguing that we are now seeing evidence of evolutionary adaptation in these specific shark immunity genes, which just happen also to be involved in promoting cancer in humans,” said study co-lead Mahmood Shivji, of NSU, in a statement.

The researchers, while allowing that a resistance to cancer in sharks and rays has yet to be confirmed, say their results suggest the possibility that the proteins related to the two genes have functions that may include protection from cancer.

The Bag1 gene, they say, is involved in the creation of a protein that in people inhibits “programmed cell death,” in which dysfunctional cells die without incident. Cancer’s malignant cells are known to sidestep that death.

In sharks, the scientists, say, the Bag1 gene adaptation they have documented could suggest the gene has taken on a new role during evolution, one that alters its ability to undermine programmed cell death in the animals.

“The immune system of sharks and rays has been battle-tested and evolved over hundreds of millions of years,” said Shivji, director of NSU’s Save Our Seas Shark Research Center and Guy Harvey Research Institute. “Using genomics approaches to understanding their immunity genesis is likely to produce many more exciting discoveries, some of which could potentially translate into human medical benefit.”

It should be recalled that a young Ukrainian scientist Olha Brovarets made a discovery that can help cure cancer earlier this month.