Shares
Stargazers around the globe will be treated to a variety of astronomical events in 2017, ranging from a spectacular supermoon to the king of all meteor showers. 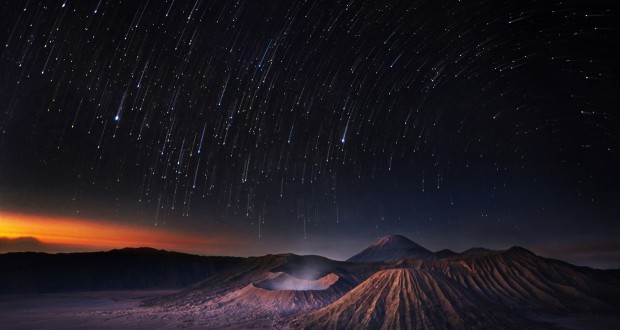 The Accuweather prepared a calendar of astronomical events in 2017.  The most anticipated event of the year will be a total solar eclipse, the first that will be seen in decades across the United States.

And the first big astronomy event we can watch as soon as February 11 is penumbral lunar eclipse. The first big astronomical event of 2017 takes place during the second weekend of February and will be visible across much of the world.

On the night of Friday, Feb. 10, into the early morning hours of Saturday, Feb. 11, people from central Asia to the Americas will be able to see a penumbral lunar eclipse.

Those across the United States will not be able to view the entire event but will still be able to watch the second part of the eclipse after the moon rises in the evening.

The largest planet in the solar system will appear exceptionally bright in the night sky this spring, outshining every other planet.

On April 7, Jupiter will reach opposition, the point in its orbit where it is closest to the Earth. This is the best time of year to view Jupiter as it will be brighter than normal. During this event, the planet will also be visible throughout the entire night.

The weeks leading up to and immediately following opposition will also be ideal for viewing the planet, so stargazers can choose a night with optimal weather to head outside to view Jupiter.

Jupiter can be viewed by the unaided eye; however, those with a telescope or good pair of binoculars will be in for an extra treat.

Depending on the strength of the binoculars or telescope, onlookers will be able to see Jupiter’s four largest moons: Io, Europa, Ganymede and Callisto.

Stronger equipment may also allow people to see the colored cloud bands of Jupiter and perhaps even the famous Great Red Spot, a large, hurricanelike storm on Jupiter that has been churning for hundreds of years. Day will turn into night across the United States on Aug. 21, as the country experiences its first total solar eclipse in decades.

On this day, the moon will pass directly between the Earth and the sun, casting a shadow on the United States that will track from Oregon to South Carolina.

The best area to view the eclipse will be along a narrow path that stretches across the country from Oregon to South Carolina. It is in this area that people will be able to see the moon completely block out the sun.

People that are not in this area should still mark their calendars as a partial solar eclipse will be visible across the rest of the United States, as well as parts of Canada and Mexico.

It is extremely important that anyone planning to watch the eclipse do so with a pair of eclipse glasses or a specially-made solar filter.

Looking at the sun without the proper eye-wear can be harmful and lead to permanent eye damage. Even a standard pair of sunglasses does not provide the proper protection for safely viewing a solar eclipse.

People in the eastern United States that miss the eclipse in August will have another opportunity to witness a solar eclipse in eight years.

On April 8, 2024, a total solar eclipse will be visible across the eastern United States with the path of totality reaching from Texas to Maine. After a year featuring three-consecutive supermoons, only one supermoon is in store for 2017.

A supermoon is a full moon that appears larger and brighter than normal. It occurs when a full moon falls near or on perigee, the point in the moon’s orbit where it is closest to the Earth. Ocean tides will also be slightly higher than normal during a supermoon.

The lone supermoon of 2017 will fall on the night of Dec. 3. This will also be the last full moon of the year.

The best time to view and photograph the supermoon will be shortly after it rises when it is still close to the horizon. When the moon is near the horizon, an illusion occurs that makes it appear even larger than it actually is.

The full moon in December also goes by many different names, including the Full Cold Moon, the Long Nights Moon and Moon Before Yule. The Geminid meteor shower is sometimes referred to as the king of all meteor showers, producing 120 multi-colored meteors an hour at its peak. This is more than any other meteor shower in a typical year.

The Geminids will peak on the night of Dec. 13 and into the early morning hours of Dec. 14.

In 2016, the peak of the shower fell on the same night as a supermoon. Light pollution from the brighter-than-normal moon greatly reduced the number of shooting stars that were visible.

This year paints a different picture with the peak of the shower falling just a few days before the new moon, which will create a dark backdrop. Onlookers won’t have to contend with added light pollution from the moon.