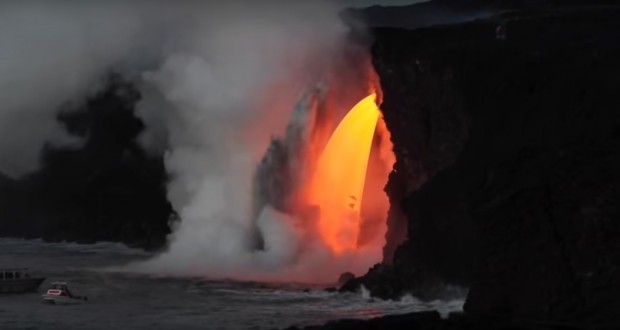 Few examples of lava spill could be more spectacular than the one shown below. Footage captured by eppixadventures.com on January 29 shows a strong flow of bright orange molten rock hitting the sea, sending explosions of ash and steam into the air, Joinfo.com reports with reference to The Weather Network.

The U.S. Geological Survey (USGS) warns people not to get too close to such a seductive sight, with explosions and unstable land creating real dangers. A couple of hikers are seen in this footage, closely observing the spill from a clifftop, even as rocks crumble away into the sea beneath them.

“Good thing the hikers scurry back a few yards,” the uploader wrote. “Just seconds later a huge littoral explosion lands debris right where they’re standing!! A reminder to be smart and cautious.”

This eruption of Kilauea, from its Puʻu ʻŌʻō crater, has been ongoing since 1983. Lava has been pouring into the ocean near Kilauea since a lava delta there collapsed on December 31, taking part of the sea cliff with it.

“At Kīlauea’s ocean entry on Jan. 28 and 29, the interaction of molten lava flowing into cool seawater caused pulsating littoral explosions that threw spatter (fragments of molten lava) high into the air,” said the USGS. “Some of these incandescent clasts fell on top of the sea cliff behind the ocean entry, forming a small spatter cone. During one exceptionally large burst, spatter was thrown about twice the height of the sea cliff. These ocean entry littoral explosions, both large and small, create hazardous conditions on land and at sea.”

The Island of Hawai’i is composed of five volcanoes, two of which–Mauna Loa and Kilauea–have erupted repeatedly in this century, according to the USGS.

Most of Kilauea’s lava flows erupted since 1992 have remained within the National Park, but Kilauea’s geologic history indicates that future activity will again threaten residential areas on the volcano’s south flank, says the agency.