Shares
Reddit has decided to ban two high-profile communities of the alt-right over what appears to be the posting and dissemination of personal information, otherwise known as doxing. 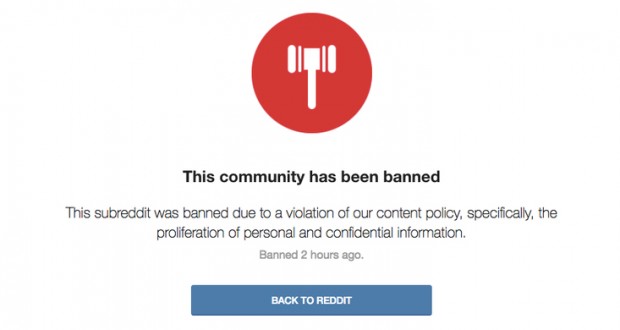 The subreddit pages for r/altright and r/alternativeright are both inaccessible, with identical messages on both detailing a violation of Reddit’s content policy, “specifically, the proliferation of personal and confidential information,” Joinfo.com reports with reference to The Verge.

It’s unclear right now who specifically was doxed, but chatter on Reddit alternative Voat suggests it was the man who punched alt-right figurehead Richard Spencer. In a statement, Reddit said it strives to be a “welcoming, open platform all by trusting our users to maintain an environment that cultivates genuine conversation and adheres to our content policy.”

“We are very clear in our site terms of service that posting of personal information can get users banned from Reddit and we ask our communities not to post content that harasses or invites harassment,” the statement reads. “We have banned r/altright due to repeated violations of the terms of our content policy. There is no single solution to these issues and we are actively engaging with the Reddit community to improve everyone’s experience.”

The alt-right is a loosely organized online coalition made up of white nationalists, Trump supporters, and other fringe conservative groups. On Reddit, members of the alt-right have flocked to subreddits sympathetic to or centered on the cause, which itself remains an amorphous concept with aims ranging from harassing anti-Trump protestors to promoting racist, xenophobic, and other white nationalist aims.

So the banning of these two particular subreddits may not have a substantial effect on the movement. Some Reddit users have already moved over to Voat, where an ongoing thread has sprouted up to discuss the bans. Of course, there are still far more prominent communities, like r/The_Donald, where alt-right members and sympathizers congregate on Reddit.

Still, that Reddit as a company is taking a stand against these communities is notable, if only after the outright violation of its policies. Earlier this week, Reddit co-founder Alexis Ohanian posted an impassioned open letter to the company’s blog that called Trump’s immigration ban “deeply un-American” and detailed his past as the son of an undocumented immigrant and the great grandson of refugees who fled the Armenian genocide. Reddit has since promoted Ohanian’s move, telling reporters in a statement that his letter “is already one of the top 40 highest scoring posts in Reddit history, as well as the highest scoring post ever on Reddit.com’s blog.”