Shares
Roman Zozulya has returned to Real Betis hours into his loan spell with Rayo Vallecano after fans of his new club called him a neo-Nazi. 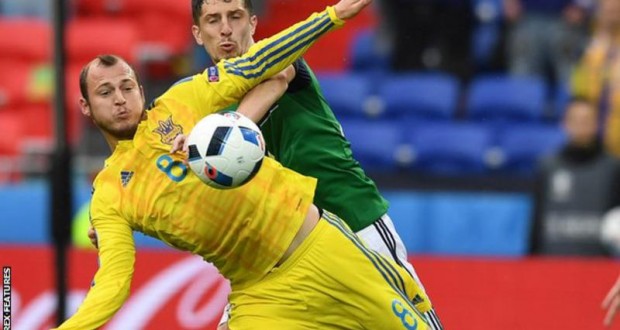 The 27-year-old Ukraine striker wrote an open letter to fans of Rayo, who have a large left-wing fanbase, after his deadline-day move denying he had links to the far right, Joinfo.com reports with reference to the BBC.

But supporters of the Madrid-based second-tier strugglers turned up to his first training session, protesting with a banner saying their town was “not a place for Nazis”.

Zozulya, who joined Seville-based Betis from Dnipro Dnipropetrovsk in the summer, will not be able to play again this season, because league rules say players cannot register for more than two teams in one campaign.

His open letter to fans on Tuesday said: “Unfortunately, my arrival in Spain was accompanied by a misunderstanding by a journalist who knows very little about the reality of my country and my own career.

“Betis asked for the article to be removed, which it was immediately after [the newspaper] recognised their error and apologised.

“As I stated at my presentation with Real Betis, I’m not linked to any paramilitary or neo-Nazi group.”

But Rayo fans did not believe him and told him to leave the club during his first – and only – training session.

Betis sporting director Miguel Torrecilla said: “We have decided it’s in the best interests of the player to return to Seville.

“The player is very upset, he didn’t expect this to happen. Yesterday he wrote a letter to Rayo’s fans but it seems as if he couldn’t convince certain sectors and we’ll receive him back here.”