US Ambassador to UN hits Russia hard on Ukraine – CNN

Shares
The US ambassador to the United Nations offered a strong condemnation of Russia in her first appearance at the UN Security Council on Thursday, calling on Moscow to de-escalate violence in eastern Ukraine and saying that US sanctions against Moscow would remain in place until it withdraws from Crimea. 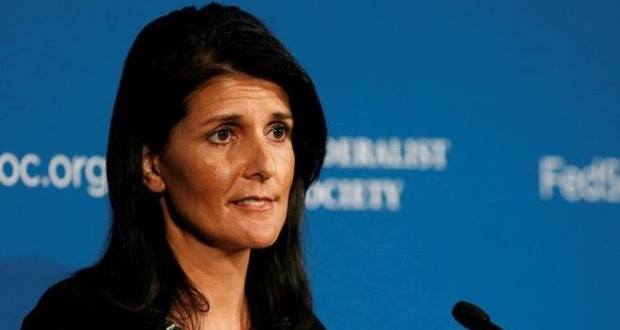 “The United States continues to condemn and call for an immediate end to the Russian occupation of Crimea,” said Nikki Haley, President Donald Trump’s envoy to the world body, CNN reports.

“Crimea is a part of Ukraine. Our Crimea-related sanctions will remain in place until Russia returns control over the peninsula to Ukraine,” Haley said.

Haley was speaking at an emergency UN meeting about a sudden upsurge in violence in eastern Ukraine, where Russian-backed separatists have been fighting the Ukrainian army. Her remarks were notable for the stark difference between her rhetoric and Trump’s.

The first source said Haley made clear in private conversations as well as during her confirmation hearings how she felt about hot spots like Russia, though her point of view clearly differs from some of what the President said during the campaign.

As a candidate, the President hinted he might recognize Russia’s annexation of Crimea. In the weeks before and after his inauguration, Trump’s refusal to condemn Russian hacking during the election and his attacks on the intelligence community for investigating those hacks raised questions about his ties to Moscow.

Questions only deepened after CNN reported that the intelligence community was looking into reports that Moscow may have compromising financial and personal information about the President. Trump has insisted that he would simply like better relations with Moscow.

At a news conference with British Prime Minister Theresa May last week, he said it was “too early” to discuss sanctions.

On Thursday, the Treasury Department slightly eased a sanction the Obama administration put in place against Russia’s Federal Security Service, known as the FSB.

A top State Department official said the move was made as a technical fix to the sanctions that were put in place to avoid “unintended consequences” of US government business with Russia.

While Washington was taking that step, Haley was lobbing verbal grenades. “I consider it unfortunate that the occasion of my first appearance here is one in which I must condemn the aggressive actions of Russia,” she said. “We do want to better our relations with Russia. However, the dire situation in eastern Ukraine is one that demands clear and strong condemnation of Russian actions.”

“The sudden increase in fighting in eastern Ukraine has trapped thousands of civilians and destroyed vital infrastructure and the crisis is spreading, endangering many thousands more,” Haley added. “This escalation of violence must stop.”

At one point in the charged meeting, Ukraine’s Ambassador to the UN, Volodymyr Yelchenko, held up a photo of a Ukraine serviceman who was killed days ago. Looking at the Russian ambassador, Yelchenko said, “You killed him.”

While Haley’s remarks echoed many speeches delivered by the Obama administration’s UN ambassador, Russia’s Ambassador to the UN Vitaly Churkin told reporters that he thinks “there is a change in tone” with the new US administration. He added that he wasn’t surprised by Haley’s speech. Some analysts see the surge in fighting as a Russian test of US resolve or perhaps an attempt to send Ukraine a message that after years of Obama administration support, the Trump administration will be more friendly to Moscow than Kiev.

Fighting between Russian-backed rebels from the self-proclaimed Donetsk People’s Republic and the Ukrainian army exploded a day after Trump had his first phone call with Russian President Vladimir Putin on Saturday. Russia accuses Ukraine of starting the escalation.

Churkin said that Ukraine was “desperately, frantically trying to achieve a military settlement to the conflict.” He blamed Kiev for the recent escalation, saying it was meant to keep the issue “on the international agenda” and “at the same time suck in with their reckless confrontational policy newly elected heads of state.”

The UK Ambassador to the UN, Matthew Rycroft, told the UN meeting that “we frequently hear from the Russian government, as we did today, that all the problems in eastern Ukraine are the consequence of actions by the Ukrainian government. This is simply not the case. It is an inversion of reality.”

Balazs Jarabik, a non-resident fellow at the Carnegie Endowment who studies Central and Eastern Europe, notes that the rebels used rockets that were in flagrant violation of the Minsk Agreement, a ceasefire pact meant to end the fighting.

“Why did they violate it so visibly?” Jarabik asked. “I think there’s merit to the speculation that the Russians wanted to show that Kiev doesn’t have the backing it used to have from the US.”

And initially, the US response was seen as tepid at best. A January 31 statement from the State Department condemned the violence, but didn’t mention Russia or contain the statement of support for Ukraine that was customary during the Obama administration.

“There was panicking” in Ukraine after that statement, Jarabik said, speaking from Kiev. “There were Ukrainian pundits saying it’s the end of US support — because it had such a different tone than the Obama administration. The so-called unwavering support seemed gone. It was sending shock waves.”

Lawmakers on both sides of the aisle have long called for a more supportive approach to Ukraine. They often criticized the Obama administration for its refusal to provide Kiev with defensive weapons.

On Thursday, Republican Sen. Marco Rubio of Florida called again for the US to provide weapons. “Vladimir Putin’s continued aggression against the people of Ukraine is outrageous, and further destabilization in the region will have profound negative consequences for us here in America,” Rubio told CNN.

He noted that Trump’s new Secretary of State Rex Tillerson and Secretary of Defense James Mattis both advocated during their confirmation hearings for providing Ukraine with weapons to defend its sovereign territory.

“I hope President Trump will heed their advice,” Rubio said. “We must stand with the people of Ukraine during this difficult hour and make clear to Putin that relations will not improve until Russia respects Ukraine’s sovereignty.”

Democratic Sen. Robert Menendez of New Jersey drew a link between Trump’s mollifying approach to Russia and the aggression in Ukraine. “At the mere hint that President Trump would take a softer stance towards Russia, we have already seen pro-Russian forces emboldened and renew fighting” in eastern Ukraine, he told CNN.

Menendez is part of a bipartisan group of senators who have introduced the Countering Russian Hostilities Act, which he said would hold Russia accountable for its international aggression and interference in the US election.

“I sincerely hope both the Trump administration and Congressional Republicans don’t make the mistake of walking away from longstanding, responsible policies to counter Russian aggression,” he said.