Home / World / Doomsday asteroids are on their way to Earth, but we are safe for another 1.35mln years

Doomsday asteroids are on their way to Earth, but we are safe for another 1.35mln years

Shares
Asteroids that could wipe out humanity are on path to hit Earth - but we should be safe for another 1.35 million years. 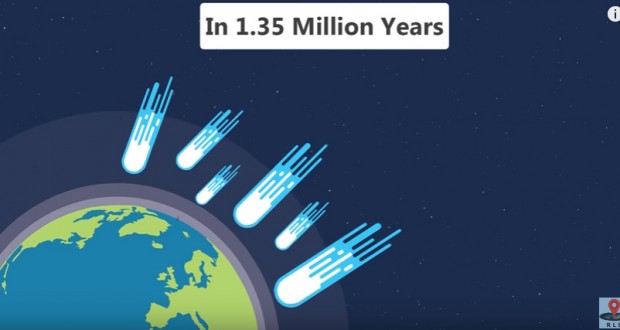 There are around 2,000 known asteroids that could strike our planet in the next billion years, according to experts. However, the chance of Earth actually being hit by one of these in the near future is close to zero, Daily Mail Online reports.

Nasa revealed earlier this month that two space rocks were heading towards Earth, although neither pose a threat to our planet.

Of all the asteroids that have been discovered, more than 1,650 are considered to be ‘potentially hazardous’ by Nasa – with only 157 larger than 3,000ft (915m) in diameter. An asteroid measuring 500ft in diameter is the most likely to hit Earth, with a one in 625 chance of striking, the experts at Real Life Lore explain in a YouTube video.

But it would be more than 160 years before the asteroid hit the planet.

Meanwhile, the star Gliese 710 – which will pass 77 light days from the Earth in 1.35million years – is set to send asteroids from the outer reaches of the solar system towards Earth, having a potentially catastrophic impact.

Titanic asteroids over 6.2 miles in size are capable of wiping out life on earth – but the last one known to hit was 66 million years ago.

The asteroid destroyed 75 per cent of life on earth, including the dinosaurs.

The Earth is hit on average once a year by asteroids measuring around 13ft (4m) in diameter – the size of an elephant.

Meanwhile, asteroids around 25ft (8m) in diameter – which can cause an explosion the size of Hiroshima – strike the Earth once every four years on average.

However, it is rare for these to be witnessed by humans, as 70 per cent of the Earth is water – and many of these objects explode in the upper atmosphere.

Asteroids about 66ft (20m) in diameter – or the size of a six-storey building – hit the earth on average twice every 100 years.

They can cause an explosion of 500 kilotons, or about 30 times the size of Hiroshima.

The last time an asteroid of this size hit was in 2013, over Chelyabinsk, Russia.

It exploded 18 miles above the ground and damaged over 7,000 buildings across six cities.