Shares
The Antarctic research base that first discovered the hole in the ozone layer has been moved in a dramatic rescue mission to stop it falling into a huge ice chasm. 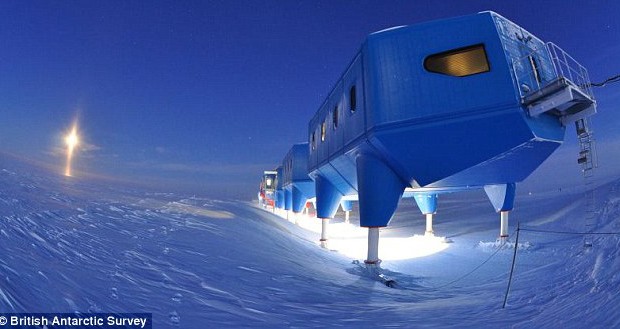 The Halley VI Research Station, which is home to the British Antarctic Survey, was relocated 14 miles across the Brunt Ice Shelf, amid fears in could slide into an encroaching fissure, Joinfo.com reports with reference to Daily Mail Online.

However, researchers say a second crack has been spotted, and is so unpredictable that researchers will now abandon the station for the winter.

Teams have spent the past 13 weeks moving each of the station’s eight modules 23 km upstream of a previously dormant ice chasm. Last month, as a safety precaution, the Director of BAS took the decision not to winter a team at Halley following the detection of a new and unpredictable ice crack on the Brunt Ice Shelf.

Whilst during the Antarctic summer ships and aircraft operating in the vicinity would enable BAS to mount a fast uplift of personnel if a fracturing of the ice shelf occurred, access is extremely difficult during the winter months of 24-hour darkness, extremely low temperatures and the frozen sea.

The station is now ready for re-occupation at the end of the Antarctic winter (November 2017), the BAS said.

Scientific instruments and equipment have been ‘winterised’ at the new site, ready to be used when the science teams return in November.

Some scientific equipment is being returned to UK for maintenance. ‘The relocation is a terrific achievement for our operational teams, said Director of BAS Professor Dame Jane Francis.

‘Everyone who has worked so hard is absolutely buoyant about the success of the move.

‘They talk about the great collegiality, what a great team they made, and how much they will miss working together.

‘They are very proud of what they achieved – and I am proud of them all.’

‘Delivering a complex project like this in remote Antarctica requires exceptional people,’ said Adam Bradley, the project manager for the relocation.

‘The team down here this season surpassed our expectations – they worked incredibly hard, often in very difficult conditions, to get the job done safely and on schedule.

‘The camaraderie of the group has been amazing, which made the season fun as well as successful.’

Meteorological and ozone equipment is being readied in temporary facilities so that measurements can resume as early as possible next Antarctic summer.

The British Antarctic survey said changes to the ice presents ‘a complex glaciological picture’ that causes concern about the shelf on which the station is located in the coming months.

The survey says a new crack on the floating Brunt Ice Shelf in Antarctica will force them to remove people before the Antarctic winter, which runs from March to November, ends. The Halley VI Research Station is set to be relocated 14 miles across the Brunt Ice Shelf, amid fears in could slide into an encroaching fissure in the ice shelf. This map shows the current location of Halley VI, its future location, and The Crack, labelled as Chasm I

There’s no risk to the people currently at the station, but difficulties in evacuating people during the winter prompted scientists to shut the station as a precaution.

‘The current work to relocate our station is going very well. This challenging engineering project is scheduled to complete as planned by early March 2017.

See also: Biggest iceberg ever is ready to crack off Antarctica.