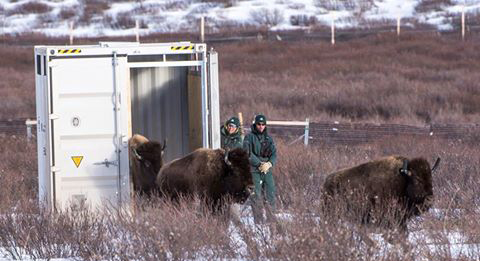 The first wild bison to roam Banff National Park in more than a century have been transported to a remote valley in a “historic homecoming” aimed at re-establishing a thriving herd, Parks Canada said Monday, CBC reports.

While many remember what Parks Canada calls a “display herd” of bison housed in a paddock near the Banff townsite until 1997, this new herd represents a return to wild animals, eventually free to wander their surroundings.

The 16 bison — primarily pregnant two year olds — were loaded onto shipping containers on trucks in Elk Island National Park, about 35 kilometers east of Edmonton, and transported to the park in the past week.

The shipping containers were ferried by helicopter over the slopes and lowered into an enclosed pasture in Panther Valley near Sundre on the eastern slopes of the park.

The bison were let out into the pasture, where they’ll stay for 16 months while being closely monitored by Parks Canada using radio collars.

Eventually, in the summer of 2018, they’ll be released into a 1,200-square-kilometre area on the eastern slopes of the park, where they can interact with other native species, forage for food and integrate into the ecosystem.

Harvey Locke, a conservationist, writer and trustee with the Eleanor Luxton Historical Foundation in Banff, deemed the day a historic moment.

Local conservationists involved in the relocation said they were relieved the moving process went so smoothly after years of research, preparations and consultations with various groups.

Karsten Heuer, a conservationist and adviser in the project, hailed it as a “big first step in bringing bison back to Banff National Park.”

“It’s a huge relief to actually have hooves on the ground,” Heuer said.