Kremlin Critic In Coma Was ‘Poisoned By Undefined Substance’ 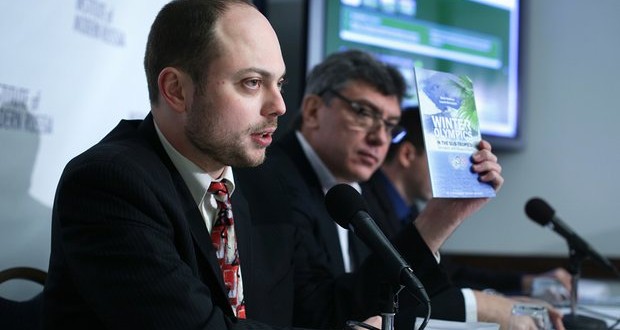 A prominent Kremlin critic and Russian opposition figure Vladimir Kara-Murza, 35, who has been in a coma since last week has been diagnosed with “acute poisoning by an undefined substance”, his wife has said, according to The Guardian.

Vladimir works for Mikhail Khodorkovsky’s Open Russia foundation, had been in Russia to screen a documentary film about his friend Boris Nemtsov, the opposition leader and former deputy prime minister who was gunned down near the Kremlin in 2015.

Kara-Murza was about to fly back to the US for his daughter’s eighth birthday when he woke up at 5am on Thursday with an accelerated heartbeat and difficulty breathing. He remained in a stable but critical condition on Tuesday in a medically induced coma, his wife, Yevgeniya, said.

Kara-Murza was taken to the same hospital in 2015, when he was diagnosed with acute kidney failure in connection with poisoning and only just survived. He later said it had been an attempt to kill him for his political activities. The symptoms were the same in this latest attempt on his life, his wife told the Guardian.

The family has sent blood samples to laboratories in France and Israel in an attempt to identify the poison, which they were unable to do last time.

On Tuesday she said Donald Trump, who said in an interview this weekend that he respected Vladimir Putin, should realise that a true leader would not allow people to be “poisoned because of their beliefs”.

When Fox News host Bill O’Reilly said during the interview that “Putin’s a killer”, Trump defended the Russian leader: “We’ve got a lot of killers. What, do you think our country’s so innocent?”

“President Trump should realise that Putin is not a friend; he is a killer,” she said. “Putin is a killer and should be dealt with accordingly.”

The Kara-Murzas live in the US with their three young children, but he frequently returns to Russia. Together with Nemtsov, he helped organise street protests against Putin and co-authored a 2013 report about corruption in preparations for the president’s prized Sochi Olympics.

Kara-Murza had shown the documentary in several Russian cities and was preparing to release it online, his wife said, adding that her husband had decided to continue with his activism despite the 2015 poisoning.

“He still believed his presence in Russia was more useful because he continued with his documentary,” she said. “If he can get back to normal, which we pray for, we’ll see what now, because his documentary is done. It’s going to be his choice but I know [his work] will still be connected to Russia.”

Kara-Murza is not the first Putin critic to have been poisoned. Former Russian spy Alexander Litvinenko died in London in 2006 after drinking tea that was found to be laced with polonium-210, a radioactive substance. An inquiry last year said two Russian agents had murdered Litvinenko and that the hit was “probably approved” by Putin.