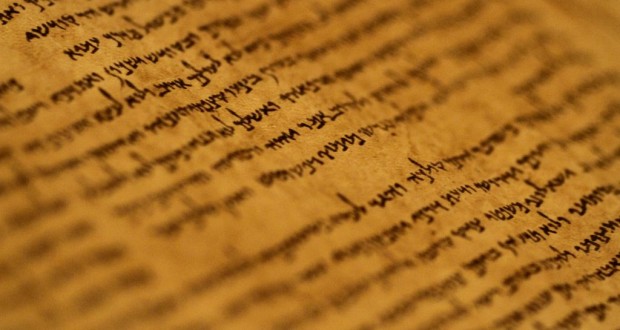 Over 60 years after the first excavations at Qumran, researchers from Hebrew University said Wednesday that they identified the 12th cave near Qumran they believe contained Dead Sea Scrolls until it was plundered in the middle of the 20th century, Joinfo.com reports with reference to The Times of Israel.

The latest excavation was conducted by Hebrew University and the Israel Antiquities Authority under the auspices of the IDF’s Civil Administration.

It yielded no new scrolls, but archaeologists found a small scrap of parchment in a jar and a collection of at least seven storage jugs identical to those found in the other Qumran caves. 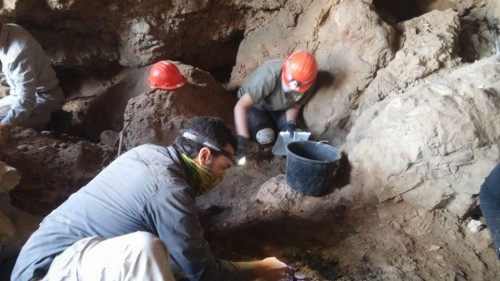 Altogether there was “no doubt we have a new scroll cave,” Oren Gutfeld, head archaeologist from the dig, said.

“Only the scrolls themselves are not there.”

The bit of parchment and other organic remains have been dated to the first century AD, when the community at Qumran was active during the twilight of the Second Temple period. 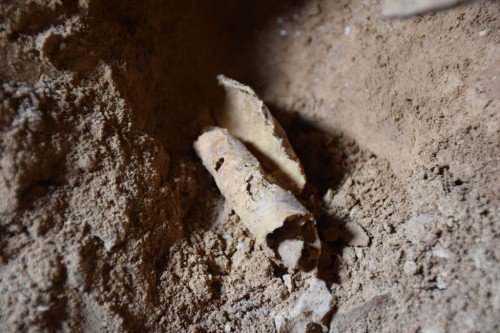 Remnant of scroll found in a cave near Qumran after it was removed from jar (Casey L. Olson and Oren Gutfeld, Hebrew University)

Pickaxes from the 1940s, a smoking gun from the Bedouin plunderers who dug in the cave, were found along with the ancient remains.

The dig in the cliffs west of Qumran, situated over the Green Line in the West Bank, was headed by Hebrew University’s Oren Gutfeld and Ahiad Ovadia with the collaboration of Randall Price and students from Virginia’s Liberty University.

“This exciting excavation is the closest we’ve come to discovering new Dead Sea Scrolls in 60 years,” Gutfeld said. “Until now, it was accepted that Dead Sea Scrolls were found only in 11 caves at Qumran, but now there is no doubt that this is the twelfth cave.”

The first batch of ancient scrolls plundered from caves near the shores of the Dead Sea were purchased by Israeli scholars from the black market in 1947, and additional texts surfaced in the years following in excavations in the Jordanian-held West Bank and for sale on the black market. After Israel captured the West Bank in 1967, many of the scrolls stored in the Rockefeller Museum in East Jerusalem were transferred to the Israel Museum.

Altogether, the nearly 1,000 ancient Jewish texts dated to the Second Temple period comprise a vast corpus of historical and religious documents that include the earliest known copies of biblical texts.

Roughly a quarter of the manuscripts are made up of material belonging to the Hebrew Bible, while another quarter detail the Qumran community’s unique philosophy.

The various scrolls and scroll fragments are identified by the cave they were believed to be stored in over the centuries. The new cave’s discovery shakes things up.

“How can we know for sure that they only came from 11 caves? For sure there were 12 caves, and maybe more,” Gutfeld said.

Among the other finds discovered in the cavern, now designated Q12 to denote its inclusion in the Qumran cave complex, were a leather strap for binding scrolls and a cloth for wrapping them, the university said in a statement announcing the find. Other discoveries included flint blades, arrowheads, and a carnelian stamp seal, all of which point to the cave’s inhabitation as far back as the Chalcolithic and the Neolithic periods. 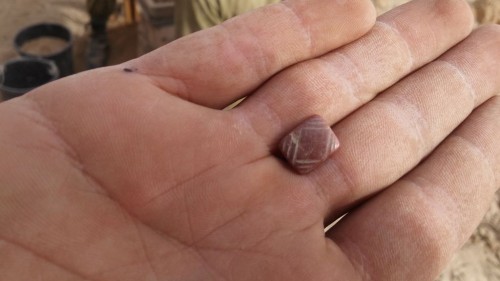 A stamp seal made of carnelian found in a cave near Qumran in 2017. (Casey L. Olson and Oren Gutfeld, Hebrew University)

Experts at the Dead Sea Scroll Laboratories in Jerusalem found no writing on the scrap of parchment found in the jar, but they plan to carry out multispectral imaging of the artifact to reveal any ink invisible to the naked eye.

The Q12 study was carried out as part of the Israel Antiquities Authority’s efforts to systematically excavate Judean Desert caves that may hold ancient scroll caches in a bid to foil antiquities theft. The expedition to Qumran was the first of its kind in the northern Judean Desert.

The IAA announced in November that it was launching a massive project to find as yet undiscovered Dead Sea Scrolls in the desert. Last summer an IAA team excavated the Cave of the Skulls in Zeelim Valley after the antiquities watchdog caught thieves in the act.

Gutfeld said he and his team “absolutely” plan to survey more caves in the region of Qumran in the coming months to determine where else to dig.