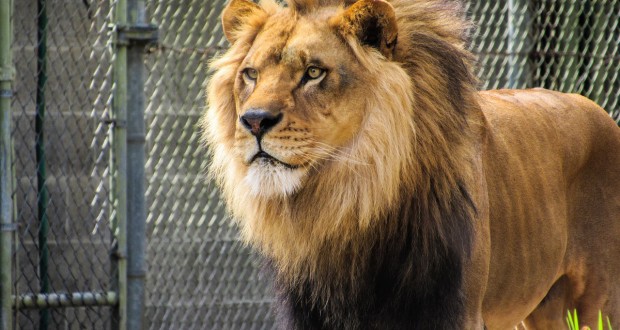 What would you do if you suddenly ran into the king of beasts on a dark road in Ethiopia? Scream? Run? Faint? Not Çağan Şekercioğlu. Instead, he took a deep breath and kept his camera rolling from inside his vehicle, capturing a rare video of an Ethiopian lion, National Geographic reports.

Şekercioğlu, a National Geographic Explorer and ornithologist at the University of Utah, recently traveled to the Bale Mountains National Parkto study the long-term effects of climate change on birds. On the long drives between birding sites, he also conducted mammal road surveys.

“That night, we hit upon the best mammal of all,” says Şekercioğlu, who is also a trained videographer and photographer. (See Şekercioğlu’s adventures on his Instagram.)

Most African lions live in the classic savannah habitat of sub-Saharan Africa, but there are a few populations scattered in other countries, including the mountains of Ethiopia.

Ethiopian lions, known for their unusually black manes, were feared extinct until a population of around 50 were rediscovered in 2016. Because few scientists have studied these big cats, it’s unclear if they—and another group of a hundred or so lions across the border in Sudan—represent a separate subspecies.

Şekercioğlu says it took a lot of willpower to keep the camera steady through the open window when the male lion approached within a few feet of his vehicle.

“Part of me was thinking, ‘This is great footage, and I have to keep still,’” he says. “The scientist part of my brain was super excited, but the regular person part just wanted to get out of there.”

Hans Bauer, a conservation biologist with Oxford University’s Wildlife Conservation Research Unit (WildCRU) and part of the team that recently found the animals, noted that the video is valuable information, but that Şekercioğlu was not in any danger. (Also see “Don’t Feed the Bears: Ethics in Wildlife Photography and Filmmaking.”)

“I appreciate that people get enthusiastic when they see [a] lion. But people get carried away and make it more than it is,” Bauer says.

Because the light shining in the lion’s face likely blinded him (Bauer notes he stumbled a few times) the animal probably did not perceive Şekercioğlu as potential prey.

“He just finds an annoying big stinking noisy machine [in] his way and wants to get past.”

Lions may seem plentiful for how much they show up in nature documentaries, but the truth is much more bleak.

Since 1980, global lion populations are thought to have declined by up to 75 percent, and there may be fewer than 20,000 of the big cats remaining in the wild. The lion is considered vulnerable to extinction by the International Union for Conservation of Nature.

Ethiopia’s lions, in particular, are intriguing due to their remoteness.

“It’s a three-day drive from civilization to get where the lions are,” says Bauer.

“And if you have any problems with the car, you are really in trouble. It’s not somewhere you go for the weekend.”

In fact, Alatash National Park has never had a tourist, the report says, so ecotourism safaris are unlikely.