Shares
Scientists have successfully decoded the genome of quinoa, one of the world's most nutritious but underutilised crops. 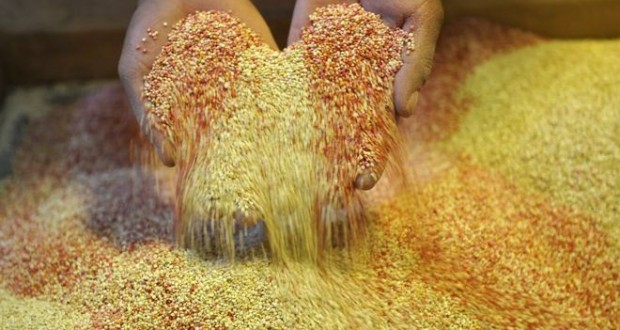 The South American grain is a hugely popular “super-food” because it is well balanced and gluten-free, the BBC reports.

However, prices for quinoa have rocketed in recent years as demand exceeded supply.

Researchers believe the genetic code will rapidly lead to more productive varieties that will push down costs.

Experts say that quinoa was first domesticated more than 7,000 years ago around Lake Titicaca in the Andean highlands and centuries later became known as the “mother grain” of the Inca empire.

After the arrival of the Spanish, the crop was marginalised and never fully domesticated or bred to its full potential.

The crop grows at high altitudes and in cool temperatures, factors which have limited its production outside of Peru, Bolivia and Ecuador, although many countries grow small amounts.

However the nutritional composition and the fact that quinoa is gluten-free, high in protein and moderate in carbohydrate has seen international demand for the foodstuff soar.

Prices tripled between 2006 and 2013 principally because quinoa’s adoption as a “super-food” in Europe and the US.

Although fears were expressed that such rapid rises would hurt poorer people in South America who depend on quinoa, research showed that the increase in price actually benefitted people in the region.

Now an international team of scientists say that they have taken a major step forward in understanding the genetic makeup of the crop.

Using a combination of techniques, the researchers have produced the highest quality quinoa gene sequence to date.

“By sequencing the genome we have provided the foundation to enable breeders to work much faster and more powerfully,” project leader Prof Mark Tester, from King Abdullah University of Science and Technology (KAUST), told BBC News.

“Especially the seeds, they will be able to develop a lot more varieties for different conditions, they will help us make a designer plant.”

The researchers say they have already make a key discovery because of the genome.

Quinoa seeds contain saponins, bitter and toxic compounds that protects the plant from predators. Removing the saponins for human consumption drives up the costs of processing.

“We’ve pinpointed one of the genes that we believe controls the production of saponins in quinoa which would facilitate the breeding of plants without saponins to make the seeds taste sweeter,” said Prof Tester.

The researchers at KAUST were drawn to quinoa because of its ability to tolerate salt. The Saudi institute was interested in the crop because they believe it has great potential to grow in poorer soils, such as those in the Middle East, including those with a high salt level.

The scientists believe that the genetic understanding now gained will allow them to breed shorter, stockier plants that don’t fall over as easily, and these benefits could be gained without the use of genetic modification.

They believe that these new breeds will see quinoa grown in more parts of the world – and that greater supply will push down the price.

“We need the price of quinoa to go down by a factor of five,” said Prof Tester.

“If we get to a similar price to wheat it can be used in processing and in bread making and in many other foods and products. It has the chance to truly add to current world food production.”

Other scientists in this field have welcome the news that the quinoa genome has been sequenced.

“The quinoa DNA sequence information is extremely valuable for identifying key genes controlling important agronomic traits and for identifying genetic variability among the cultivars,” said Dr Sven-Erik Jacobsen from the University of Copenhagen.

“Now breeders can go into quinoa genomic library for the information that will help speed up the breeding process.”

Researchers believe that genetic sequence of the grain will boost the production and popularity of the grain and it may no longer be the preserve of middle class foodies in richer countries.

“They can keep enjoying it,” said Prof Tester.

“But they just might get a little bit annoyed that what they’re eating is not so unusual and everyone else is eating it too!”

The study has been published in the journal Nature.