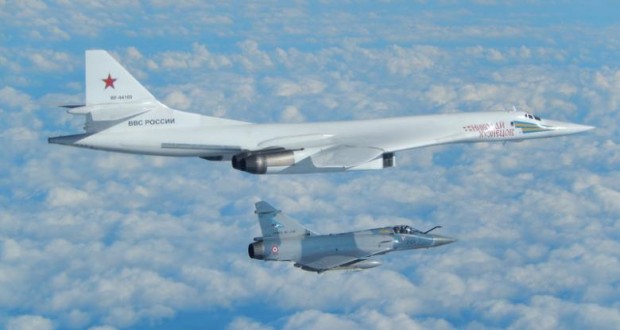 From close-up encounters with Russian warplanes to the threat of attacks from lightweight drones, France’s air force is on alert on two fronts as it confronts a return to Cold War shadow-boxing and heightened domestic security concerns, Reuters reports.

In the latest alert involving European airspace, the French air force said on Thursday two Mirage combat jets and one Rafale had escorted the two bombers down the French coast before handing over to Spanish military planes.

Despite daily cat and mouse games between Western and Russian warplanes over the Baltic Sea, and regular reports of attempts by Russian jets to test reaction times of UK defenses, such contacts remain less frequent around France airspace.

A French official said the incident was the fourth time Russian fighters had been intercepted on the French coast over the past two years, a period of tension between Russia and western Europe related to the conflicts in Syria and Ukraine.

At a command center deep under Mount Verdun in southeastern France, French air force officials are monitoring what is happening further North and are ready to respond.

“We detect the Russian planes relatively early because we are integrated in the NATO military structure,” Brigadier General Pascal Delerce told Reuters inside the control room, reached through a warren of tunnels protected by thick doors.

“We know at least five or six hours before they have any chance of reaching the French coast, which allows us to deploy our resources accordingly,” he said.

According to French officials, Russian bombers take a different route each time: sometimes flying as far south as Gibraltar before turning back, or drawing a wide circle from St Petersburg through Scandinavia, the west of Ireland, Gibraltar, Syria and back to Russia over the Caspian Sea.

At the same time, the French air force carries out regular simulations and monitors potential threats from private planes or drones in its domestic airspace, amid heightened security in the country since the Paris attacks of 2015.

“The goal is to create a web of surveillance so that no aircraft be either inside French airspace or approaching it without being identified and having its posture checked,” said Yannick, a captain who can only be identified by his first name.

Recent reports that Islamic State has used drones to scout targets or launch attacks in Iraq or Syria have heightened awareness of the threat from unmanned vehicles.

“The fact that they can take off close to the actual target which they could be aiming gives you a short reaction time, even if the threat is a small-scale one,” said Philippe Adam.

France says it is ready to use jamming or GPS blocking equipment, and even a squadron of four specially trained golden eagles, to neutralize drones.