Shares
A ruthless killer may soon help brain cancer patients. The rabies virus, which kills tens of thousands of people a year, has a rare ability to enter nerve cells and use them as a conduit to infect brain tissue. 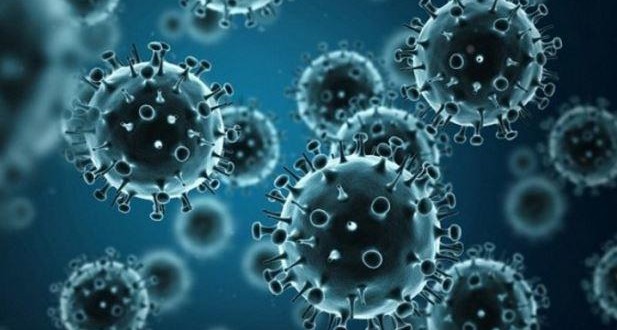 Now, scientists are trying to mimic this strategy to ferry tumor-killing nanoparticles into brain tumors, Joinfo.com reports with reference to Science magazine.

So far the approach has been shown to work only in mice. If successful in people, these nanoparticles could one day help doctors send treatment directly to tumors without harming healthy cells.

The rabies virus, transmitted largely through the bites of infected animals, has evolved over thousands of years to hijack nerve cells, which it uses to climb from infected muscle tissue into the brain. That allows it to bypass a major hurdle: the blood-brain barrier, a selective membrane that keeps out most pathogens that travel through the bloodstream. But the barrier also prevents treatments—like cancer drugs—from reaching infected cells, limiting options for patients.

To get around this problem, scientists are looking to the virus for inspiration. Already, researchers have packaged cancer-fighting drugs into nanoparticles coated with part of a rabies surface protein that lets the virus slip into the central nervous system. Now, a team of researchers from Sungkyunkwan University in Suwon, South Korea, has taken things one step further. Nanoparticle expert Yu Seok Youn and his team have engineered gold particles so that they have the same rodlike shape and size as the virus. 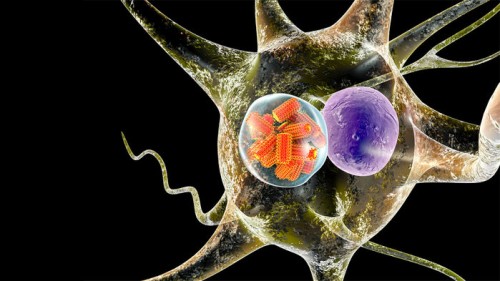 The nanoparticle’s shape gives it more surface area than spherical particles, improving the surface protein’s ability to bind with receptors on nerve cells that serve as a gateway to the nervous system. The particles don’t carry any drugs, but the tiny gold rods readily absorb laser light, which heats them up and kills surrounding tissue.

To see whether these new particles could be effective against tumors, Youn and his team first injected them into the tail veins of four mice with brain tumors. The nanoparticles quickly traveled to the brain, where they accumulated near the tumor sites. The team then fired a near infrared laser at the nanoparticles, heating them to nearly 50°C. The light harmlessly passed through skin and bone, but heat from the gold particles radiated outward, effectively cooking nearby cancer cells. The treatment greatly reduced the size of the tumors, Youn and his colleagues report this month in Advanced Materials. In another experiment, the researchers used the same treatment on mice with tumor cells that had been injected into their flanks. Tumors on two of the mice disappeared after 7 days, whereas the other tumors shrank to about half their original size.

Still uncertain is just how the nanoparticles reached the tumor cells. Youn says they likely traveled the same path as the rabies virus—through the central nervous system. That would make the nanoparticles good candidates for treating other cancers “located on the route,” he says.

But not everyone is convinced. Rachael Sirianni, a drug delivery scientist at the Barrow Neurological Institute in Phoenix, questions whether the nanoparticles actually made it inside the tumor cells. It normally takes a long time for the rabies virus to traverse the central nervous system, whereas Youn’s nanoparticles made it to tumor cells in a matter of hours. They could still be effective at suppressing tumors, but they might lead to other, unwanted side effects. “The ideal scenario is [that] only the tumor cells take up these gold nanorods,” Sirianni says. “In reality … you’re probably getting these rods to vascular cells, between vascular cells, and [only] some of them to the tumor.” Leakage outside the tumor cells would mean that the heated particles could potentially fry healthy cells in the process.

Another worry, according to Feng Chen, a materials scientist at the Memorial Sloan Kettering Cancer Center in New York City, is toxicity. Large nanoparticles like these often end up in the liver and take a long time to clear out. That could make it more challenging to get the therapy ready for human trials and Food and Drug Administration approval, Chen says.

But Youn is pressing forward. He says that the new nanoparticles accumulate preferentially in tumors, which could drastically reduce the side effects of current cancer treatments that usually kill healthy cells along with the targeted cancer cells. “Researchers need to develop … nanoparticles, precisely and effectively to target tumors,” he says. “That’s my obligation.”