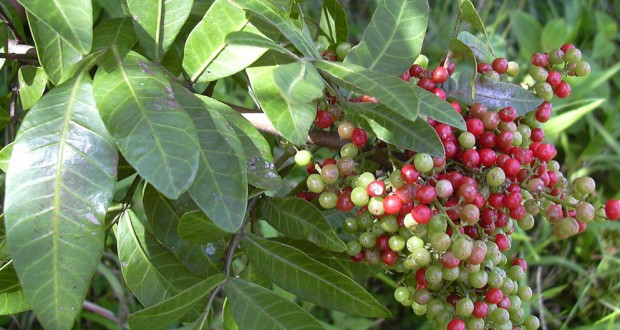 In a paper published in Scientific Reports, American researchers have shown that an extract from the berry of the Brazilian peppertree can affect the dangerous methicillin-resistant Staphylococcus aureus (MRSA). The flavone-rich compound discovered by the team represses a gene that allows MRSA to communicate, making it easier for the body to fight it off, Joinfo.com reports with reference to IFL Science.

“It essentially disarms the MRSA bacteria, preventing it from excreting the toxins it uses as weapons to damage tissues,” Professor Cassandra Quave, senior author and ethnobotanist at Emory University, said in a statement. “The body’s normal immune system then stands a better chance of healing a wound.”

The team tested the compound on mice with MRSA skin infections. The researchers discovered that the extract staves off infection and doesn’t harm the skin of the mice or the helpful bacteria living on it.

The technique, known as the anti-virulence method, was also tested on lab-grown human skin cells and appears to be well tolerated. This is promising news, as even though the extract doesn’t kill off the infection, it might make a tremendous difference in combination with other therapies.

“In some cases, you need to go in heavily with antibiotics to treat a patient,” Quave added. “But instead of always setting a bomb off to kill an infection, there are situations where using an anti-virulence method may be just as effective, while also helping to restore balance to the health of a patient. More research is needed to better understand how we can best leverage anti-virulence therapeutics to improve patient outcomes.”

The researchers looked into the Brazilian peppertree because it is used in the Amazon by healers to treat skin and soft tissue infections.

“The Brazilian peppertree is not some exotic and rare plant found only on a remote mountaintop somewhere,” Quave says. “It’s a weed, and the bane of many a landowner in Florida.”

But its tenacity is probably its strength. “Persistent, weedy plants tend to have a chemical advantage in their ecosystems, which may help protect them from diseases so they can more easily spread in a new environment.”

The researchers will now look into pre-medical trials to test its exact medical benefits. Antibiotic resistance causes 2 million illnesses every year and at least 23,000 deaths in the US alone. According to the UN, it has the potential to kill 10 million people a year by 2050.