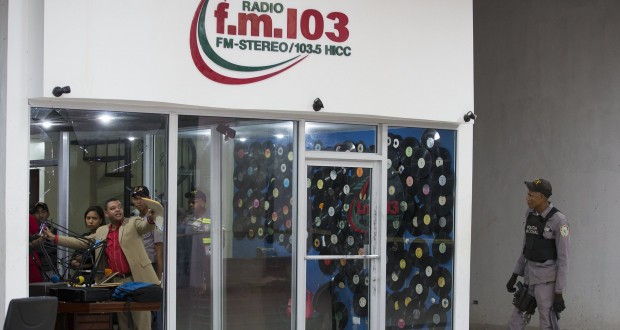 Two radio journalists have been killed in the Dominican Republic after gunmen opened fire during a news bulletin which was being broadcast on Facebook Live, Joinfo.com reports with reference to The Guardian.

Luís Manuel Medina, the presenter of the news program Milenio Caliente – or Hot Millennium – was killed while on air on Tuesday morning. Producer and director Leo Martínez was shot dead in an adjacent office at the radio station FM 103.5.

Gunfire could be heard during the Facebook Live video, along with a woman yelling “Shots! Shots! Shots!” before the transmission abruptly cuts off.

The station secretary Dayaba Garcia was also injured in the attack and taken to hospital where she needed emergency surgery.

Police said the shooting occurred in San Pedro de Macorís, a small city 45 miles east of the capital, Santo Domingo. The radio station is located within a shopping mall.

Three men have been arrested, but none has been charged. Police say they do not yet have a motive.

Medina was also the official announcer of the Estrellas Orientales baseball team.

Olivo de Leon, from the College of Journalism who knew both men, said the attack was unprecedented in the country’s history. “For gunmen to open fire in a media outlet like this is unprecedented.

“The authorities must investigate to determine not just the killers but also the intellectual authors so that we know why they were murdered. Impunity in this case will generate fear among journalists, making them scared to speak out and do their jobs. The government must guarantee freedom of expression,” De Leon told the Guardian in a telephone interview from Santo Domingo.

While murders are rare, harassment and intimidation of journalists reporting on organized crime and corruption is fairly common in the Dominican Republic.

In recent years, reporters who spoke out against a controversial 2013 court ruling which stripped Dominicans of Haitian descent of their citizenship have received death threats and suffered vicious online harassment campaigns.

The last journalist to be killed in the country was Blas Olivo who was shot dead in April 2015. Police said Olvio, press director of the Dominican Agribusiness Association, was the victim of a bungled robbery, even though neither his car nor phone were stolen. The investigation is underway.