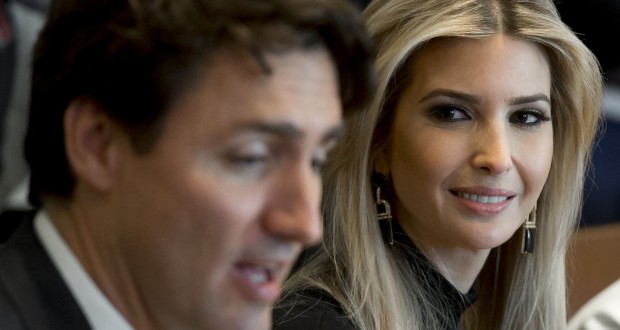 Ivanka Trump <3s Justin Trudeau – at least if you believe what you see on the internet, The Guardian reports.

Pictures of the two at a roundtable discussion about women in the workforce have gone viral this week as mischief-makers suggest the US president’s daughter may be swooning a little over the Canadian prime minister.

On much of the internet, Trudeau is essentially regarded as a Disney prince come to life – so, naturally, it assumes anyone who meets him is instantly smitten. No one is safe – not even the Duchess of Cambridge:

Then again, maybe the true love story here was between Trudeau and former president Barack Obama:

Everyone talking about how all these girls look at Trudeau but look at how Trudeau looks at Obama pic.twitter.com/dzvjBZqUnb

The meeting itself had already attracted some controversy after Ivanka tweeted a picture of herself alongside her father and Trudeau in the president’s seat:

A great discussion with two world leaders about the importance of women having a seat at the table! pic.twitter.com/AtiSiOoho0 — Ivanka Trump (@IvankaTrump) 13 февраля 2017 г.

Trump’s daughter holds no official role in his administration, yet she has participated in a number of official events.

Trudeau’s visit to the White House this week was a boom time for memes – particularly one about his handshake with Trump.