Pakistan: IS attack on Sufi shrine in Sindh kills dozens

Shares
A suicide attack in a popular shrine in southern Pakistan has killed at least 72 people, police say. 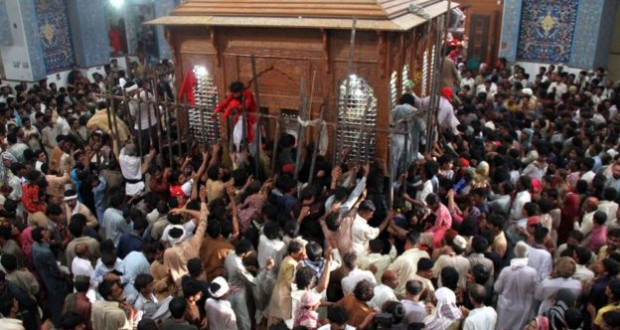 The bomber blew himself up among devotees in the shrine of Sufi saint Lal Shahbaz Qalandar in the town of Sehwan, in Sindh province, police said, the BBC reports.

Prime Minister Nawaz Sharif has condemned the attack, which has been claimed by so-called Islamic State.

A surge of attacks this week has shattered a period of improving security in Pakistan.

The shrine was crowded as Thursday is considered a sacred day for Muslims to pray there.

The blast, in one of the country’s most revered shrines, is the deadliest in a string of bombings in Pakistan this week, claimed by the Pakistani Taliban and other Islamist militants.

The Edhi Welfare Trust, which runs the country’s largest ambulance service, said 43 of the dead were men, nine women and 20 children.

At least 250 others were wounded, a senior police official told the BBC. The only hospital in the area was said to be overwhelmed.

Prime Minister Sharif has vowed to fight the militants who have carried out attacks.

“The past few days have been hard, and my heart is with the victims,” he said in a statement.

“But we can’t let these events divide us, or scare us. We must stand united in this struggle for the Pakistani identity, and universal humanity.”

Sufism has been practised in Pakistan for centuries. Most of the country’s radical Sunni militant groups despise the Sufis, as well as Shia Muslims, as heretics.

And on Monday, at least 13 people died in a suicide bombing in the eastern city of Lahore. A faction of the Pakistani Taliban, Jamaat-ur-Ahrar, said it had carried out that attack.

After a couple of years of diminishing violence credited to a military operation that kicked off in June 2014, the militants appear to have returned with a vengeance.

In six back-to-back attacks since Sunday, suicide bombers have killed nearly 100 people in different parts of the country.

There have been some spectacular, though sporadic, attacks in recent months that have exacted a significant toll on human life.

This surge has blown the lid off an air of complacency that was brought on by statements of the military and civilian leaders to the effect that Pakistan had successfully defeated the militants.

The army chief, General Qamar Javed Bajwa, now seems to have lost patience. On Thursday he issued a veiled threat to some neighbouring countries that “each drop of [the] nation’s blood shall be avenged, and avenged immediately. No more restraint for anyone.”

Pakistani officials have been accusing Afghanistan of not eliminating the sanctuaries of anti-Pakistan militants on its soil.

It has also been blaming India for using Afghan soil to foment trouble in Pakistan. But many here believe that militancy refuses to die down because Pakistan continues to tolerate selective militant structures as cover for its own covert wars that sustain the economy of its security establishment.