Home / World / Another heavy shelling on Avdiyivka: Father of two killed by militants’ tank round on east Ukrainian town

Another heavy shelling on Avdiyivka: Father of two killed by militants’ tank round on east Ukrainian town

Shares
One civilian and one soldier were killed, eight people injured in militant tank shelling on the east Ukrainian town of Avdiyivka on Thursday 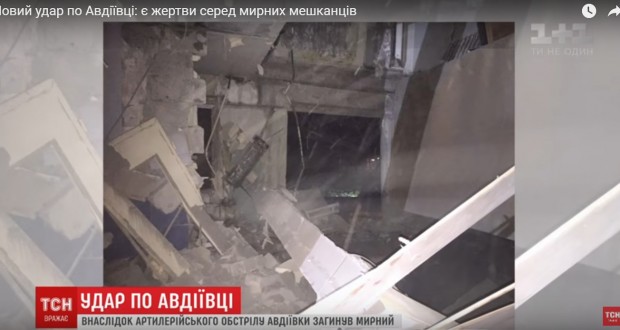 Terrorists targeted the center of the town, hitting three households and a shop.

Three people were injured, two of them have suffered minor injuries. One man was rushed to the Dnipro city burn center.

A 40-year-old man, a father of two children, was killed on the street by splinters of a 125-mm explosive shell released by the militants’ T-90 tank.

Eight more people were injured, three of them – civilians.

In addition, several tank shells hit the yard of the local hospital. Luckily, no one was injured.

Besides, at the frontline, one Ukrainian soldier was killed and five soldiers wounded in action. One of them is in a critical condition as he suffered a traumatic amputation of two lower limbs.

The headquarters of the Anti-Terrorist Operation reported also that 3 Ukrainian soldiers were killed, 10 wounded in Donbas over the past 24 hours.

It should be recalled that Avdiyivka was under militant attacks on January 31-February 5.