Shares
A team of researchers that is studying a class of distant solar system objects that orbit the Sun much farther than the Earth does, found that those objects had an encounter with the a planet beyond the orbit of Pluto 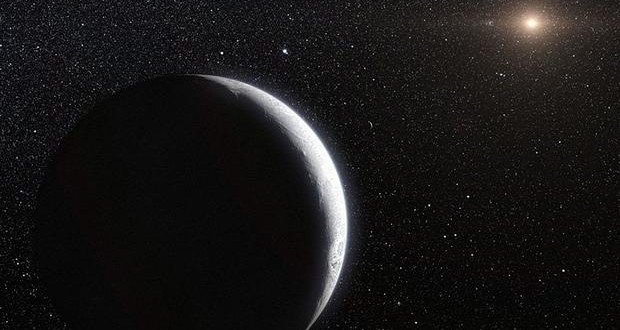 The dynamical properties of these asteroids, observed spectroscopiccally for the first time using the Gran Telescopio CANARIAS, suggest a possible common origin and give a clue to the existence of a planet beyond Pluto, the so-called ‘Planet Nine,’ Joinfo.com reports with reference to Rhys.org.

In the year 2000 the first of a new class of distant solar system objects was discovered, orbiting the Sun at a distance greater than that of Neptune: the “extreme trans Neptunian objects” (ETNOs). Their orbits are very far from the Sun compared with that of the Earth. We orbit the Sun at a mean distance of one astronomical unit (1 AU which is 150 million kilometres) but the ETNOs orbit at more than 150 AU. To give an idea of how far away they are, Pluto’s orbit is at around 40 AU and its closest approach to the Sun (perihelion) is at 30 AU. This discovery marked a turning point in Solar System studies, and up to now, a total of 21 ETNOs have been identified. 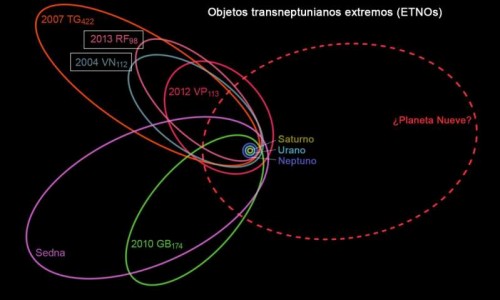 Recently, a number of studies have suggested that the dynamical parameters of the ETNOs could be better explained if there were one or more planets with masses several times that of the Earth orbiting the Sun at distances of hundreds of AU. In particular, in 2016 the researchers Brown and Batygin used the orbits of seven ETNOs to predict the existence of a “superearth” orbiting the sun at some 700 AU. This range of masses is termed sub Neptunian. This idea is referred to as the Planet Nine Hypothesis and is one of the current subjects of interest in planetary science. However, because the objects are so far away the light we receive from them is very weak and until now the only one of the 21 trans Neptunian objects observed spectroscopically was Sedna.

Now, a team of researchers led by the Instituto de Astrofísica de Canarias (IAC) in collaboration with the Complutense University of Madrid has taken a step towards the physical characterization of these bodies, and to confirm or refute the hypothesis of Planet Nine by studying them. The scientists have made the first spectroscopic observations of 2004 VN112 and 2013 RF98, both of them particularly interesting dynamically because their orbits are almost identical and the poles of the orbits are separated by a very small angle. This suggest a common origin, and their present-day orbits could be the result of a past interaction with the hypothetical Planet Nine. This study, recently published in Monthly Notices of the Royal Astronomical Society, suggests that this pair of ETNOs was a binary asteroid which separated after an encounter with a planet beyond the orbit of Pluto.

To reach these conclusions, they made the first spectroscopic observations of 2004 VN112 and 2013 RF98 in the visible range. These were performed in collaboration with the support astronomers Gianluca Lombardi and Ricardo Scarpa, using the OSIRIS spectrograph on the Gran Telescopio CANARIAS (GTC), situated in the Roque de los Muchachos Observatory (Garafía, La Plama). It was hard work to identify these asteroids because their great distance means that their apparent movement on the sky is very slow. Then, they measured their apparent magnitudes (their brightness as seen from Earth) and also recalculated the orbit of 2013 RF98, which had been poorly determined. They found this object at a distance of more than an arcminute away from the position predicted from the ephemerides. These observations have helped to improve the computed orbit, and have been published by the Minor Planet Center (MPEC 2016-U18: 2013 RF98) responsible for the identification of comets and minor planets (asteroids) as well as for measurements of their parameters and orbital positions.

The visible spectrum can give some information also about their composition. By measuring the slope of the spectrum, can be determined whether they have pure ices on their surfaces, as is the case for Pluto, as well as highly processed carbon compounds. The spectrum can also indicate the possible presence of amorphous silicates, as in the Trojan asteroids associated with Jupiter. The values obtained for 2004 VN112 and 2013 RF98 are almost identical and similar to those observed photometrically for two other ETNOs, 2000 CR105 and 2012 VP113. Sedna, however, the only one of these objects which had been previously observed spectroscopically, shows very different values from the others. These five objects are part of the group of seven used to test the hypothesis of Planet Nine, which suggests that all of them should have a common origin, except for Sedna, which is thought to have come from the inner part of the Oort cloud.

“The similar spectral gradients observed for the pair 2004 VN112 – 2013 RF98 suggests a common physical origin”, explains Julia de León, the first author of the paper, an astrophysicist at the IAC. “We are proposing the possibility that they were previously a binary asteroid which became unbound during an encounter with a more massive object”. To validate this hypothesis, the team performed thousands of numerical simulations to see how the poles of the orbits would separate as time went on. The results of these simulations suggest that a possible Planet Nine, with a mass of between 10 and 20 Earth masses orbiting the Sun at a distance between 300 and 600 AU could have deviated the pair 2004 VN112 – 2013 RF98 around 5 and 10 million years ago. This could explain, in principle, how these two asteroids, starting as a pair orbiting one another, became gradually separated in their orbits because they made an approach to a much more massive object at a particular moment in time.