Shares
Video shows a bunch of Siberian tigers in China chasing a drone. A tiger soon knocks it out of the sky and tries to eat it. 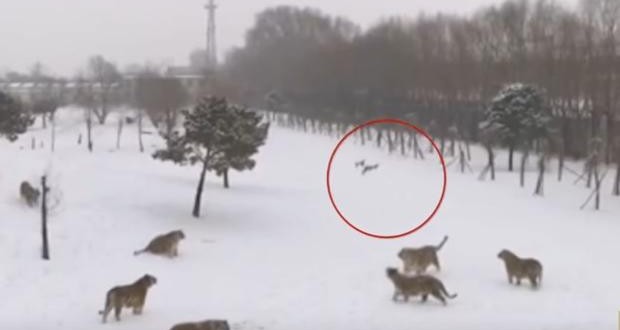 In a unique attempt to provide the tigers with some exercise, the officials of a Siberian Tiger enclosure in China’s Heilongjiang Province made them chase a drone, Joinfo.com reports with reference to India Today.

The officers flew drone in the sky and soon the Siberian tigers started to run in order to chase it down.

Soon one of the tigers jumped, eventually knocking down the drone in the sky. Thinking it was food, the tigers proceeded to tear it apart until the smoke started to come out of the drone.

The smoke scared the tigers away and the remains of the drone were later removed by the staff.

In the eyes of : A drone is knocked out of the sky after being chased by a group of tigers in China pic.twitter.com/fiEghQKwR4