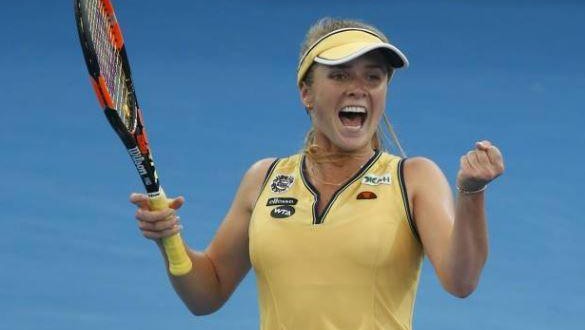 The Ukrainian, 22, beat 10th seed Wozniacki 6-4 6-2 to claim her sixth WTA title and her second of 2017, Joinfo.com reports with reference to the BBC.

Denmark’s Wozniacki won the Dubai title in 2011 and has reached the semi-finals in six of the seven years she has played at the event.

“I’m super happy that I could win this title,” Svitolina said.

“It’s always tough to play against Caroline. She’s such a fighter and never steps back. It was a great match and I’m really happy I could win.”

According to WTA, Svitolina will rise from World No.13 to a career-high No.10, making her the first Ukrainian player ever to break the WTA Top 10.

“I’ve dreamed for all my life to be in Top 10,” Svitolina said after the final, where she defeated Caroline Wozniacki in straight sets. “It’s a very amazing feeling to enter Top 10, and do it by winning the tournament! I’m very excited for the season and very excited I could win this tournament.”

The Ukrainian came into the final in Dubai knowing a victory would clinch her Top 10 debut – and the 22-year-old didn’t let the pressure of the occasion overwhelm her.

Svitolina’s milestone comes as no surprise for fans who’ve followed her career: she’s fresh off a title at the Taiwan Open earlier in the season, and with back-to-back Fed Cup wins Svitolina is in the midst of a 12-match winning streak. Last season, Svitolina took home a title at Kuala Lumpur and reached the final at New Haven and the WTA Elite Trophy Zhuhai.

Svitolina is the 120th player to make her Top 10 debut since the WTA Rankings were introduced on November 3, 1975.