‘Biohacking Is The New Gardening’: Scientists Found A Way To Grow Human Organs On Plants

Shares
The future of regenerative medicine may be plants. 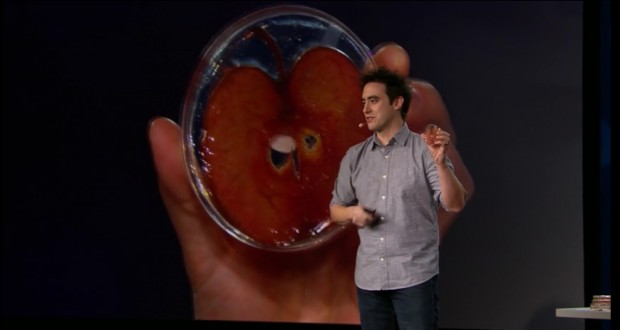 “Biohacking is the new gardening,” says Andrew Pelling, who leads the Pelling Laboratory for Biophysical Manipulation at the University of Ottawa. Pelling eschews the current vogue for genetic and chemical biological manipulation, investigating instead the ways in which cells behave when their physical surroundings change, according to The Atlantic.

In the high-ceilinged basement lab, the ear lies flat, encapsulated in a dish on a sheet-metal cabinet. It’s actually a piece of apple carved to look like an ear, yet it’s not really an apple either; the cellulose has been washed of its apple cells and populated instead with human ones. They are HeLa cells, the infamously ubiquitous cultured offspring of a long-ago cervical cancer. It is an ear made of cervix, held together by apple. 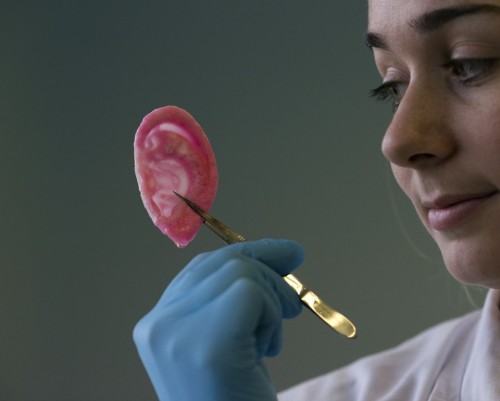 The apple ear was created as an artistic statement, referring to a famous case of a human ear that was grafted onto a mouse’s back, and its choice of HeLa cells was intentionally provocative. But the fusion of plant and animal it represents holds promise for regenerative medicine, in which defective body parts may be replaced by engineered alternatives.

Andrew Pelling explained how to turn fruits and vegetables into a new and cheap source of biomaterials to repair the human body in a TED Talk.

Biomaterials engineers, who create stand-ins for our own body tissues, historically focus on animal species, like pigs, with organs similar to ours. Until now, the plant kingdom has been largely neglected, but it offers a vast variety of architectures, many of which can serve the needs of human physiology. It also offers an escape route from expensive, proprietary biomaterials: an open-source approach.

A central challenge in organ creation is the development of materials that can host the new cells within the body, holding the organ’s shape and organization. In a synthetic approach, a molded polymer scaffold can hold the shape of an organ, then biodegrade as new cells gradually replace it. Alternatively, real donor organs can be washed of all the donors’ cells until they are white “ghost organs”—collagen structures that are then colonized with a patient’s own cells. In either case, the man-made and organic biomaterials are commercially produced or harvested and processed, at great cost.

Billions of dollars change hands in the biomaterials sector each year, replacing skin, cartilage, bone, and whole organs. The industry attracts talented researchers ready to profit from their intellectual property, but it also prices out most of the world. For example, few people can spend $800 per cubic centimeter of human decellularized dermal allograft tissue to reconstruct a badly torn rotator cuff in the shoulder, but at less than 1 cent, the same amount of apple is well within reach.

Take a McIntosh red apple from the grocery store (or a home garden), slice it and wash it with soap, then sterilize it with boiling water, like so, and you have a cellulose mesh ready for human cells. Implanted under skin, the scaffolding quickly fills with cells from the surrounding tissue, and blood vessels soon follow. After eight weeks it is still compatible with the body, with no attempt by the immune system to reject it. The plant segment is brought to life as part of an animal.

Though some of Pelling’s work involves genetic manipulation, his enthusiasm lies more in the physical manipulation of cells—prodding them with tiny needles, stretching them with lasers, or putting them into containers of various shapes to see how they organize themselves. This last approach has potential applications in some of the thorniest problems in medicine, such as paraplegia.

The tiny capillaries in asparagus stalks happen to be the right size and shape for spinal cord repairs. Pelling and a local neuroscientist have shown that nerve cells from mice grow nicely into those channels, and while spinal cord implants tend to break down in the body, plant cellulose does not. “At the same time, it’s really inert—it’s akin to titanium,” says Pelling. Similarly, rose petals can form the scaffolding for skin grafts.

“This kind of exploratory work is important, because it expands the toolkit,” says Jeffery Karp, a biomaterials expert at Harvard Medical School. “Basic discoveries provide more options for those of us in translational medicine.”

Pelling Lab is in Canada, where it benefits from a permissive regulatory environment. Unlike Europe, where there has been strong resistance to genetically modified organisms (GMOs), or the United States, with its history of controversy around early human development, Canada encourages its nascent biohacking movement as an adjunct to the health research community. In 2011, Canada’s national public health department even sponsored a symposium about “Our Post-Human Future,” whose parting discussions debated “Can Technology Be Governed?”

To be applied in medicine, open-source biomaterials—like the recipe above for decellularized apple—still must run the gauntlet of trial phases for approval by regulatory bodies. With no profit at the end of that process, the clinical testing may have to be funded outside of the private sector. Globally available, locally producible, and inexpensive biomaterials could be a goal picked up by philanthropists.

While some biological research requires certified lab facilities of various safety levels, many do not. Pelling’s lab is developing the methods to allow the general public to Tweet suggested experiments to the lab or directly control a microscope, and to replicate the results at home using do-it-yourself, home biohacking equipment and widely available materials.

“Imagine people set up cell cultures the same way they donate computer power to SETI”—the search for extraterrestrial intelligence—says Pelling. “Everybody would be looking at a piece of the puzzle, and we could assay hundreds of conditions.”

Exploratory spaces like Pelling’s lab—and his storefront makerspace in development, where members of the public will be able to muck around with biohacking—promise to bring cell manipulation to the streets, for better or worse. And with plant-based, open-source biomaterials and do-it-yourself cell-culture incubators, distributed health research could be on the way.