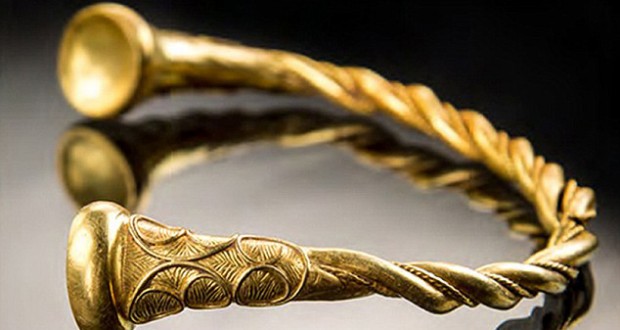 Two treasure seekers have unearthed jewellery which could be the oldest Iron Age gold ever discovered in Britain, according to Daily Mail Online.

The collection, which has been named the Leekfrith Iron Age Torcs, was found in December on farmland within the parish of Leekfrith, in the Staffordshire Moorlands. 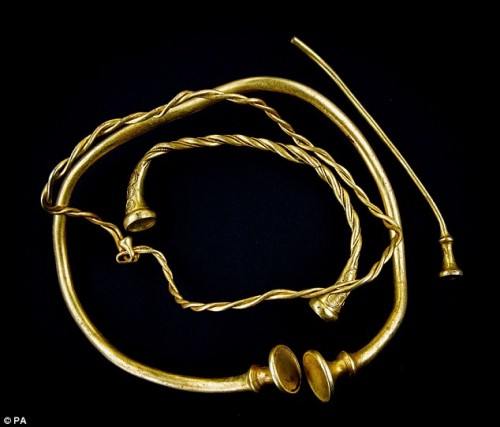 The four torcs – three necklaces and one bracelet – were found separately about 1 metre apart and buried just beneath the surface.

Experts believe they were made in the third or fourth century BC, making them approximately 2,500 years old.

They were probably made in Europe, possibly Germany or France.

It is not known why the items were buried, but it could have been for safekeeping, as an offering to the gods, or as an act of remembrance after their owner died.

Two of the pieces – a collar and a bracelet – are made of twisted gold wire.

The decoration on the bracelet is thought to be some of the earliest Celtic art from Britain.

Dr Julia Farley, curator of British & European Iron Age collections for the British Museum, said: ‘This unique find is of international importance. It dates to around 400-250 BC, and is probably the earliest Iron Age gold work ever discovered in Britain. 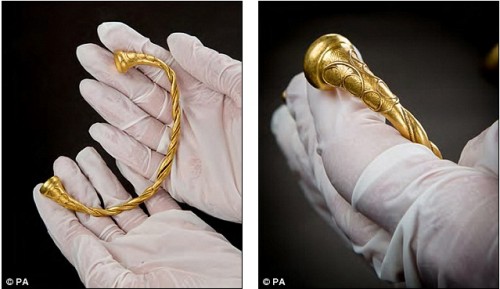 ‘The torcs were probably worn by wealthy and powerful women, perhaps people from the continent who had married into the local community.

‘Piecing together how these objects came to be carefully buried in a Staffordshire field will give us an invaluable insight into life in Iron Age Britain.’

The finds, which are estimated to be around 18 carat gold, were spotted by lifelong friends Mark Hambleton and Joe Kania.

The friends were encouraged to get back into treasure hunting by Mr Hambleton’s father Roy who managed to see their incredible find before he passed away in January.

‘I used to go metal detecting with my dad when I was young and he said to me ‘why are you bothering fishing? You should be back in those fields’, Mr Hambleton said.

‘I am so glad we took his advice and pleased of course that he got the chance to see these amazing pieces and prove he was right all along.’ 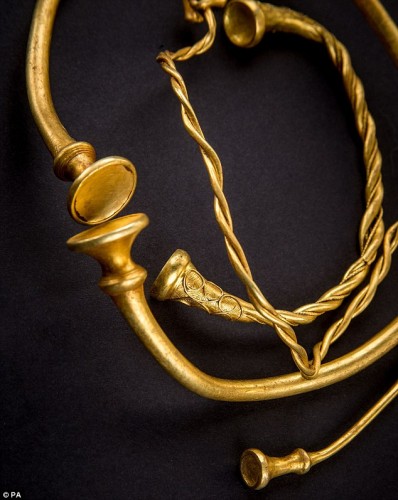 Mr Hambleton revealed he kept the collection by his bed overnight until they could report it.

‘We weren’t expecting to find anything’, he said.

‘I was just about ready to give up for the day when Joe said he thought he had found something.

‘We both looked at it and were speechless.

‘I kept the gold right next to my bed to make sure it was safe until we could hand them in to the experts.’

Mr Kania added: ‘We have found the odd Victorian coin, but mostly it has just been junk.

‘So I couldn’t believe it when I picked out this mud covered item and on cleaning it off, I thought this might actually be gold.’

The pair have said they plan to split any proceeds with the farming family which owns the 640 acres of land where the finds were discovered. 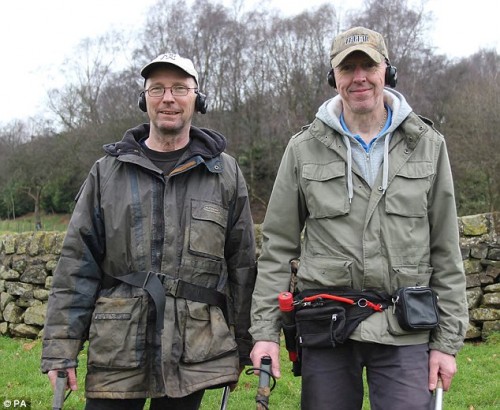 Landowner Stuart Heath said: ‘Mark has detected on our land before and it is amazing to think these gold pieces have been lying undiscovered since long before we farmed here.

‘Archaeologists have surveyed the site and all though this is very much a one-off find, we will all be fascinated to hear more about how the collection found its way from Europe to Staffordshire thousands of years ago.’

Staffordshire County Council leader Philip Atkins said: ‘As a county and as a council we are both proud and unbelievably lucky to be home to some truly exceptional finds, including of course the Staffordshire Hoard of Anglo-Saxon gold.

‘This amazing find of gold torcs in the north of the county is quite simply magical and we look forward to sharing the secrets and story they hold in the years to come.’

The finds have been handed over to the Portable Antiquities Scheme, part of Birmingham Museums, which manages the voluntary recording of finds. 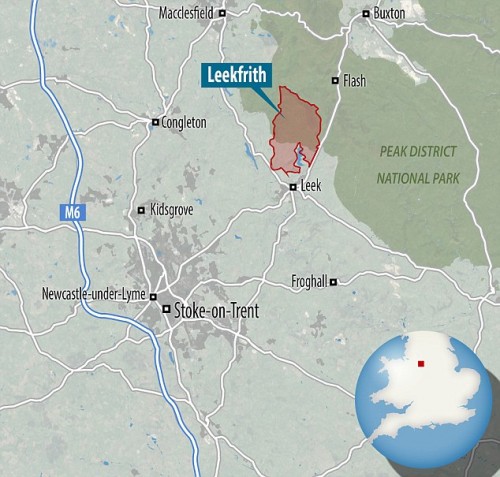 An inquest will be held at in North Staffordshire, where Coroner Ian Smith will rule if the pieces are treasure.

The pieces will then be provisionally valued by an expert.