Shares
A tongue-in-cheek petition to recruit the former US leader to run for French president has amassed thousands of signatures during a lackluster campaign season. The Parisians who launched it want a political sea change. 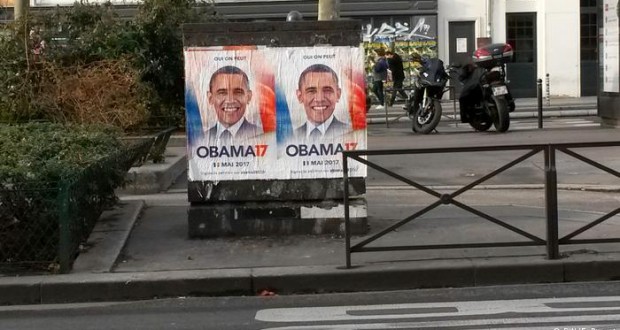 The Obama 2017 campaign posters are dotted across Paris, and an online petition has already gathered more than 40,000 signatures, Joinfo.com reports with reference to Deutsche Welle.

Barack Obama may be out of a job in the United States, but he’s in demand among a disaffected electorate in France.

“This operation aims to make people think about what’s happening with this election,” says one of the campaigners behind the Obama2017.fr initiative. “To make them laugh and dream a little bit – like having Obama as president.”

The drive to recruit the former US leader to run in France’s spring presidential elections is the brainchild of four Parisians in their 30s, dreamed up over beers. The group doesn’t want to be identified, but one of their members agreed to speak to DW anonymously.

“We didn’t launch this operation to promote ourselves,” said the campaigner, who describes the group as apolitical. “We were just talking about the election and our fears of what might happen in France, like if extremist groups were to win.”

Indeed, the drive taps into a potent vein of voter discontent during an election season marked by a sharp rejection of mainstream favorites. Two of the surviving frontrunners, far-right leader Marine Le Pen and conservative ex-prime minister Francois Fillon, are battling allegations of misappropriating public funds.

Another, 38-year-old former economy minister Emmanuel Macron, surfing on his youth and outsider status, is dismissed by some critics as a lightweight.

A December IPSOS survey found up to one-quarter of voters are tempted to cast a blank ballot during the first round of voting in April.

“Everybody is so worried and dissatisfied with the contenders they have,” says analyst Nicole Bacharan. “We have seen them forever and they keep coming back.”

Those sentiments are echoed on the Obama2017.fr website, which calls for a sea change in governance that would usher in a sixth republic. French voters, it says, should offer “a lesson in democracy to the planet in voting for a foreign president.”

“Barack Obama,” it adds, “has the best CV in the world for the job.”

“Why should we always get the same old people?” the campaigner said, dismissing a status quo in which many French politicians graduate from the same narrow list of elite schools and hang on forever.

While conceding the former US president also has elite credentials, notably degrees from Columbia University and Harvard Law School, he added, “Obama represents something we admire in France, someone who can unite people.”