Shares
Vogue Arabia launches this month - and Gigi Hadid has been revealed as its first cover star. 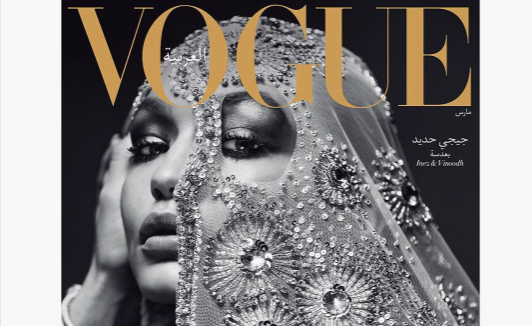 Writing on her Instagram page, the model said: “Being half-Palestinian, it means the world to me to be on the first-ever cover(s) of Vogue Arabia,” Joinfo.com reports with reference to the BBC.

I think the beautiful thing about there being international Vogue’s is that, as a fashion community, we are able to celebrate, and share with the world, different cultures. Being half-Palestinian, it means the world to me to be on the first-ever cover(s) of @voguearabia, and I hope that this magazine will show another layer of the fashion industry’s desire to continue to accept, celebrate, and incorporate all people & customs and make everyone feel like they have fashion images and moments they can relate to… & learn and grow in doing so. ❤ Thank you @deenathe1st for your vision and for having me on this cover… by the incredible @inezandvinoodh – so much love.

Two different editions of the magazine’s first issue have been produced – one in English and one in Arabic.

Different images of Hadid in a sequined headscarf feature on the two covers.

“I think the beautiful thing about there being international Vogues is that, as a fashion community, we are able to celebrate, and share with the world, different cultures,” Hadid said.

Saudi princess Deena Aljuhani Abdulaziz has been appointed the editor-in-chief of the new magazine by its publisher Conde Nast International.

“In one poised photograph, [Hadid] communicates a thousand words to a region that’s been waiting far too long for its Vogue voice to speak,” Abdulaziz said.

The reaction to the two covers has been broadly supportive – but some Instagram users left comments encouraging the publication to use Arabian models for their future issues.

“Such a gorgeous image, though I wish they’d have used an Arabian model – those girls are so beautiful,” wrote one follower of the Vogue Arabia account.

Another said: “Been waiting for this for so long maybe you’ll give a chance to Arab models like what Harper’s Bazaar did.”

Hadid has mixed heritage – her mother is a Dutch-born American while her father is Palestinian-American.

Last month, Karlie Kloss apologised on Twitter after taking part in a photo shoot for Vogue, which was criticised for racial appropriation.

In pictures for the magazine’s “diversity issue”, Kloss, who is white, had been made up to look like a geisha.

In her apology, she said: “These images appropriate a culture that is not my own and I am truly sorry for participating in a shoot that was not culturally sensitive.”

Vogue Arabia is the 22nd edition of the fashion publication to be launched.

It will be distributed in several Middle Eastern countries, including Qatar, Saudi Arabia, Bahrain, Kuwait, Oman and the United Arab Emirates.

A bilingual Arabic-English website for Vogue Arabia has already gone live, with the publication of the paper magazine to follow.

“The collage of countries across the Arab world are long-deserving of a place in fashion history,” Abdulaziz said in her message published on the website.

“And there’s no better first ‘face’ to lead the charge for Vogue Arabia than Gigi, a model who defines tomorrow’s entrepreneurial and dynamic generation.”

Alexandra Shulman, the editor of British Vogue, resigned last month after 25 years in the job – during which time she oversaw famous covers starring the Duchess of Cambridge, Princess Diana, Naomi Campbell and Kate Moss.