Shares
A bizarre video shared on YouTube today appears to show a helicopter hovering ‘magically’ in the air as its blades remain almost completely still. 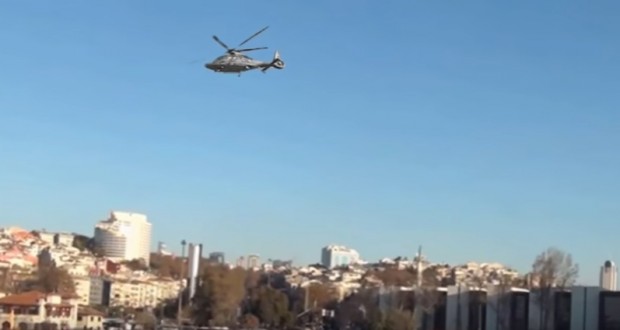 The strange phenomenon boils down to the camera’s shutter speed and frame rate, which can distort the appearance of spinning objects when synchronized, Joinfo.com reports with reference to Mail Online.

The blades at some points can be seen shifting slightly – but, not nearly as much as one would expect for an aircraft flying in the air.

Shutter speed addresses the amount of time the camera spends gathering light every time it takes a picture, a video from HowStuffWorks explains.

So, the more time spent gathering light, the more motion-blur will be apparent in an image.

And, faster shutter speeds can create strange patterns, or even make the individual blades become visible.

Frame rate – or, frames per second – also plays a role in the phenomenon.

‘Imagine you’re shooting a 24fps video of a helicopter rotor that spins one full rotation every second,’ the video explains.

‘In the video, each rotation will thus be broken into 24 frames. You’ll see the blades rotating normally, just moving one-24th of their full rotation each time.

‘But, if the blades spin exactly 24 times each second, and you’re still shooting at 24 fps, each full revolution will be represented by only one frame.

‘The blades will arrive back in their starting place each time the camera captures a frame, so they’ll look like they’re standing still.’