Home / World / In Istanbul, fat cats are a good thing

In Istanbul, fat cats are a good thing 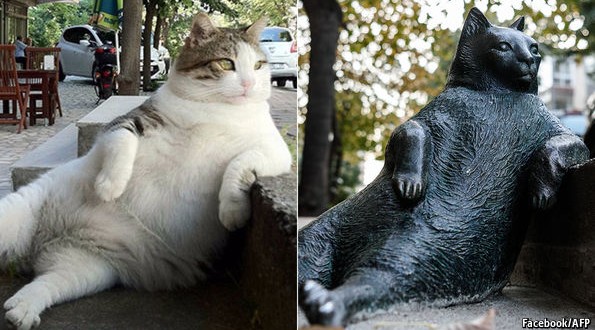 Sprawling on doorsteps, on café benches, inside hamams: stray cats and dogs are everywhere in Istanbul. Some 130,000 dogs roam the city, while at least 125,000 wild cats prowl its streets. The prevalence of strays across the city is nothing new: “The dogs sleep in the streets, all over the city,” Mark Twain wrote after an 1867 visit to Istanbul. “They would not move, though the Sultan himself passed by.” More recently their presence has taken on a new, more modern twist, according to Economist.

The popularity of animal photos on social media—combined with a desire for a glimmer of good news in Turkey—has boosted the popularity of these creatures both at home and abroad. There are at least half a dozen Facebook pages dedicated to the strays around Istanbul. One, “Cats of Istanbul”, has nearly 70,000 followers; its canine cousin, “Pups of Istanbul”, a more modest 20,000, attesting to the pointlessness of competing with cats on the internet. One particular photo, of Tombili, an obese feline who was papped leaning casually against a step, so tickled its fans that a bronze statue (pictured, with original) was put up in his honour after he died. The craze has also moved from the little screen to the silver one: in February “Kedi”, a feature-length documentary about cats in the city (see blog), opened in New York. It is now being released across America.

Many Istanbulites treat these strays as their grandparents have done before them: butchers leave out scraps; in winter locals build small huts for the cats to sleep in. Since 2004, following European convention rules, municipalities have had to neuter and vaccinate the dogs; almost all are fitted with electronic chips that record their health history. This is expensive: between 2009 and 2016 the central government spent some 19m Turkish liras ($5m) in 40-odd municipalities on animal welfare. Cats seem to cause less trouble, although in 2005 Recep Tayyip Erdogan, the president, who was then the prime minister, successfully sued Cumhuriyet, a secular newspaper, and its cartoonist, after it depicted him as a kitty caught up in a ball of wool. The cartoonist in question is currently under arrest, one of the more than a hundred journalists rounded up since a failed coup last summer.

Authorities have taken drastic, and unpopular, measures to get rid of the creatures. In 2012 the government tried to introduce a law that would have consigned street dogs and cats to remote, deserted areas referred to as “nature parks”. (This echoed a move by the authorities in 1910 to remove 80,000 dogs to an island to let them starve.) It was shelved after an outcry from animal-rights activists and dog lovers. Thousands marched in the streets. Last week several women wearing animal masks in Alanya, a coastal town, tried to file a petition “as cats” against the killing of around 50 of their fellow felines—to be told only humans could file petitions.

See also: Cats can have 5 personalities.