Shares
Royal Caribbean’s newest vessel - Symphony of the Seas - will be the world’s largest cruise ship when it is delivered in April 2018, the cruise line confirmed today. 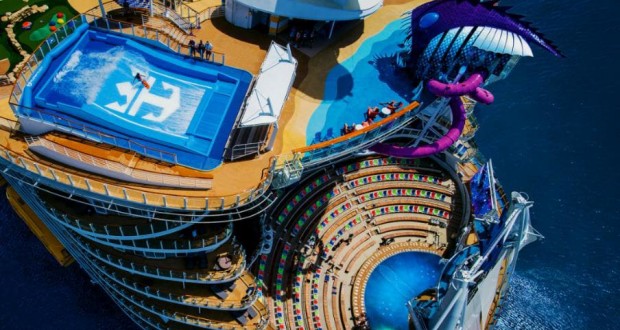 At 1,188 feet long and 215 feet wide, the new 16-deck ship will weigh 230,000 GT (gross tonnage), nearly 3,000 more than the current record holder, another Royal Caribbean ship, Harmony of the Seas, Joinfo.com reports with reference to Telegraph.

Carrying 5,494 guests at double occupancy (surpassing the capacity of 5,479 on Harmony of the Seas) and equipped with 2,775 guest rooms (28 more than its predecessor), the new ship will offer many of the same features, including a 10-storey Ultimate Abyss waterslide – which has a 100ft drop, making it the tallest at sea; a Bionic Bar, where drinks are served by a robot arm; and seven themed “neighbourhoods” on board.

The new vessel will also offer features unique to the ship which are yet to be revealed, a spokesperson for Royal Caribbean said.

The new ship will spend its inaugural summer season – from April to October 2018 – in Europe, calling at Barcelona, Palma de Mallorca, Provence, Florence, Pisa, Rome and Naples, before arriving at a new 170,000 sq-ft “state-of-the-art” cruise terminal in Port Miami (Terminal A) which is set to be America’s “most innovative cruise facility”.

Nicknamed the “Crown of Miami” for its striking crown-shaped design when viewed from the water, the new terminal is expected to be completed by late 2018 in time for the arrival of Symphony of the Seas.

From there the ship will set sail on November 17 for its first Caribbean itinerary. These will continue through to April 2019. Bookings for both its Caribbean and Mediterranean itineraries are now on sale.