A man crossed the Atlantic in the most epic way

Shares
A South African man named Chris Bertish has just become the very first human being to cross the entire Atlantic Ocean on a stand-up paddleboard. 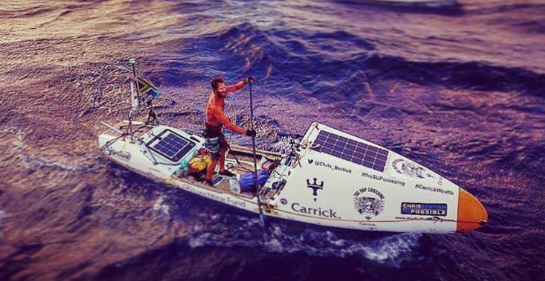 He made the fierce 4,050-mile journey alone at sea over 93 days, crossing from Agadir, Morocco to Antigua’s English Harbor, Joinfo.com reports with reference to Mashable.

He stood, he paddled, and he prevailed, traveling an average of about 43 miles a day and pulling through an incredible 60 miles on one of the last days.

Of course crossing the second largest ocean in the world doesn’t come without its challenges. Upon arriving in Antigua, Bertish said at a press conference that his last night was so intense, he didn’t know if he’d survive.

4500 nautical miles over 93 days = #badass. Congrats to @chris_bertish and his record breaking feat across the Atlantic. pic.twitter.com/bzCEC9SRiI

“When I look at the conditions we had last night, it just seems mind-boggling that I’m just alive at all, to be perfectly honest,” he said at the conference, a video of which was posted to Facebook by paddling outlet Sup the Mag.

Among one of his more harrowing stories was the time he faced giant squids and whales in the midst of a storm in the Canary Islands. With 20-foot waves raging around him, the animals before him threatened to topple over his giant board.

“I was getting pulled down through waves by a creature,” he said. “It was like something out of some science fiction film.”

The big wave surfer and sailor also won the world-renowned Mavericks Surf Contest in California, with waves at the beach there reaching up to 60 feet high.

His journey across the Atlantic was completed on a custom built board that’s 20 feet long, costs about $120,000 and took six months to construct.

Now all he has to do is cross the Pacific Ocean.