Shares
He had intended to step on the brakes, but his car ended up crashing into a roof of a house nearby. 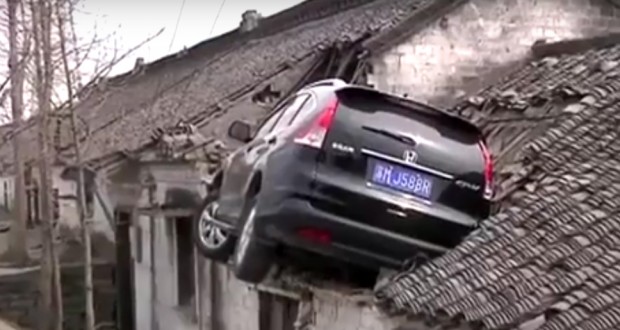 A driver in Taizhou, China, lost control of his vehicle after swerving to avoid a head-on collision. He stepped on the accelerator instead in his haste and skidded off the road, Joinfo.com reports with reference to AsiaOne.

A CCTV video shows an SUV careening off the elevated road and onto the house. According to Chinese media, the roof collapsed upon impact and the vehicle came away with dents on its front.

The driver said that he had been driving at 70 kmh at the time.

“A tricycle appeared all of a sudden and I turned north only to find that a car was coming in my direction. I stepped on the accelerator accidentally and changed my direction,” he added.

No casualties were reported.