Shares
Nicola Sturgeon has confirmed she will ask for permission to hold a second referendum on Scottish independence. 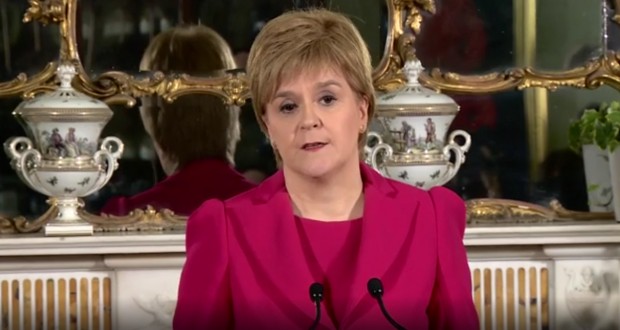 Ms Sturgeon said she wanted a vote to be held between the autumn of 2018 and the spring of the following year, Joinfo.com reports with reference to the BBC.

That would coincide with the expected conclusion of the UK’s Brexit negotiations.

The Scottish first minister said the move was needed to protect Scottish interests in the wake of the UK voting to leave the EU.

She said she would ask the Scottish Parliament next week to request a Section 30 order from Westminster.

The order would be needed to allow a fresh legally-binding referendum on independence to be held.

Prime Minister Theresa May has so far avoided saying whether or not she would grant permission.

Responding to Ms Sturgeon’s announcement, Mrs May said a second independence referendum would set Scotland on course for “uncertainty and division” and insisted that the majority of people in Scotland did not want another vote on the issue.

She added: “The tunnel vision that SNP has shown today is deeply regrettable.

“Instead of playing politics with the future of our country, the Scottish government should focus on delivering good government and public services for the people of Scotland. Politics is not a game.”

But speaking at her official Bute House residence in Edinburgh, Ms Sturgeon said the people of Scotland must be offered a choice between a “hard Brexit” and becoming an independent country.

The Scottish government has published proposals which it says would allow Scotland to remain a member of the European single market even if the rest of the UK leaves, which Mrs May has said it will.

Game on. Next week Nicola Sturgeon will go to Holyrood seeking a Section 30 order for “indyref2”.

This part, at least, should be pretty simple. There is a pro-independence majority at Holyrood; the Greens should back the SNP, so Holyrood should return a call for a second referendum.

Will the UK government give permission? Technically, they could say no. But politically, it might be very difficult for them to refuse outright.

The real battle here may not be over whether there is a referendum, but when.

Ms Sturgeon is clear she wants the vote to take place before Brexit is complete, in the spring of 2019.

The UK government may well argue it should take place after that, so there can be full focus on the tricky task of Brexit itself.

There remains a lot of detail to be hammered out before we get back on the campaign trail.