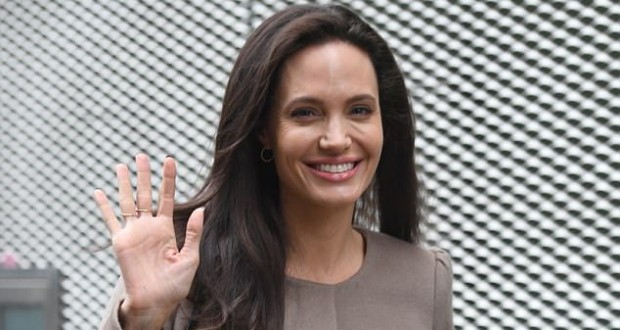 A busy day in London culminated in grand surroundings on Tuesday evening as Angelina Jolie paid a visit to Buckingham Palace. The Hollywood actress, 41, was joined by son Maddox as they took the short trip from their lavish hotel, just hours after she accepted a new role as professor in practice of London School of Economics, Joinfo.com reports with reference to Mail Online.

Jolie, dressed in a smart black evening dress and matching leather boots, looked typically elegant as they made their way towards a waiting car. 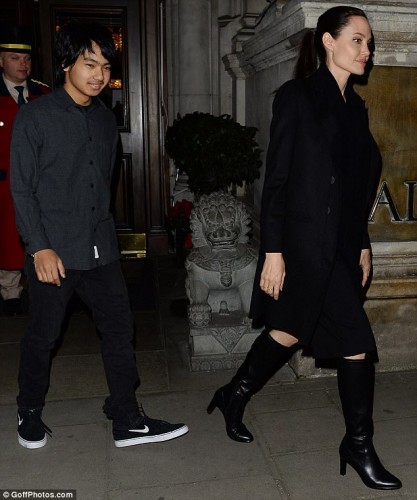 Walking alongside his mother, Maddox appeared to be in high spirits ahead of their visit to the Queen’s historic London home.

It is understood Angelina and Maddox were given a highly unusual private tour of Buckingham Palace, where no members of the royal family were present.

Earlier that day the star said she was ‘feeling butterflies’ before she lectured at the Centre for Women, Peace and Security, beginning a new master’s course on the impact of war on women.

Angelina told London’s Evening Standard: ‘I’m a little nervous, feeling butterflies. I hope I do well. This is very important to me.’ 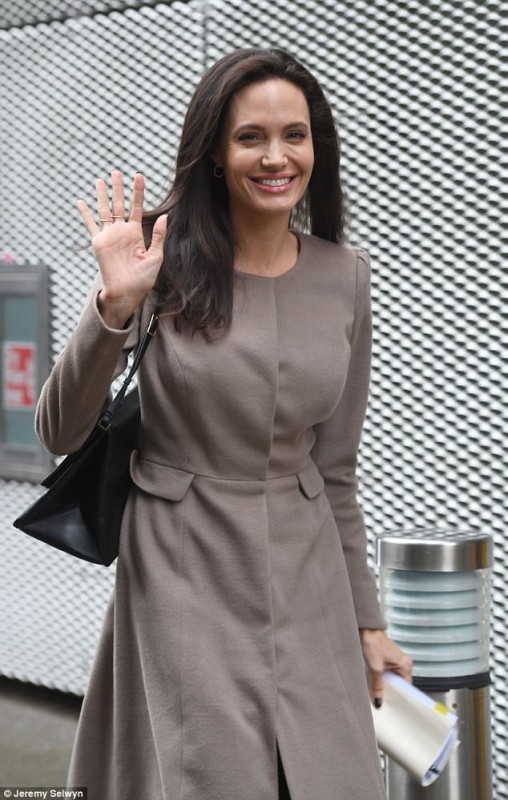 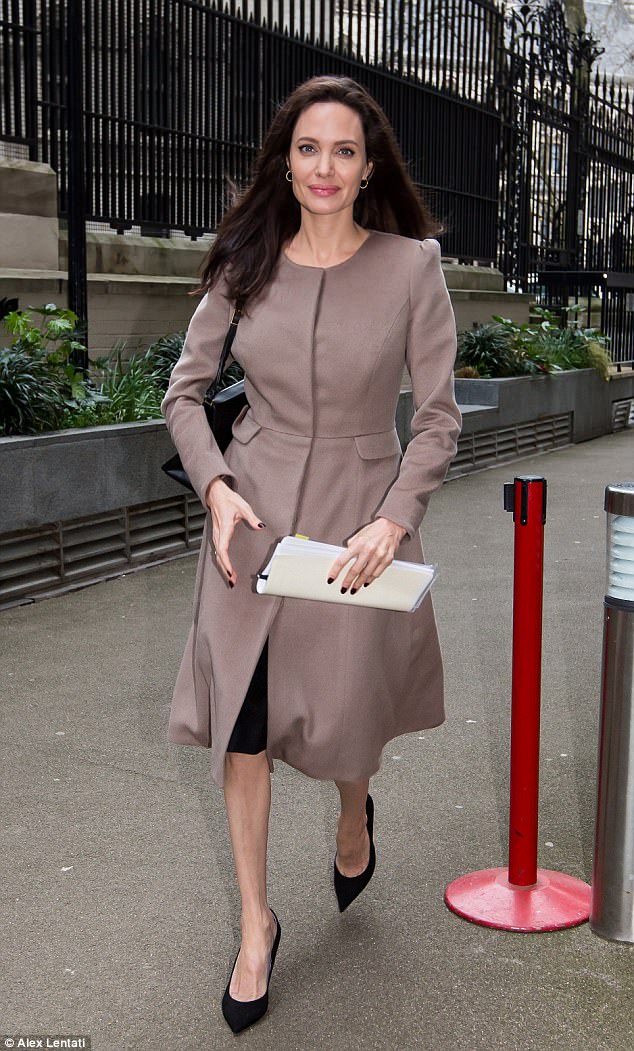 The actress addressed a class of students taking the same-titled postgraduate course, Women, Peace and Security – and her speech went down well with the class, who described the presentation as ‘wonderful’.

The course helps scholars, practitioners, activists, policy-makers and students to develop strategies to promote justice, human rights and participation for women in conflict-affected situations around the world.

They conduct original research and teach with the aim of promoting gender equality and enhancing women’s economic, social and political participation and security.

As part of her fellowship, Angelina will also be able to conduct her own research in the field.

The activist spoke about her experience and what has motivated her work as United Nations Special Envoy. 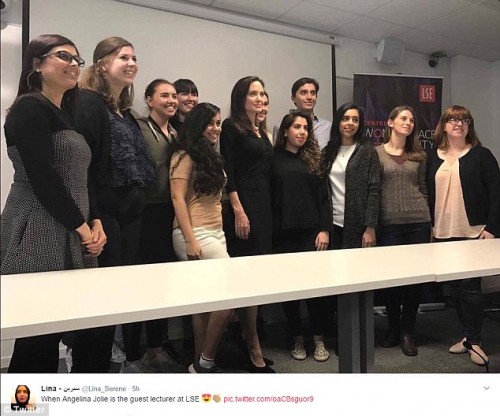 Afterwards, students were full of praise for the actress, sharing pictures from inside her lecture and calling her presentation ‘wonderful’.

One starstruck attendee reassured the ‘nervous’ speaker by saying: ‘Ms. Jolie, you did wonderfully!’ while another simply said: ‘Incredible lecture by Angelina today’

One other shared a group picture with the actress and captioned it: ‘When Angelina Jolie is the guest lecturer at LSE’

In her new role, Angelina is invited to attended public events and workshops in association with the course, ‘as her schedule allows’.

The school announced the presence of Angelina on their own social media account on Tuesday morning and word quickly spread across campus.

‘Was just sitting in an LSE cafe waiting for my lecture,’ one stunned Facebook user wrote. ‘And Angelina Jolie strolls past and into the upstairs offices followed by flashing cameras.

‘Needless to say, I was looking fairly out of place, we made eye contact and I saw my life flash before my eyes… Jokes but seriously if you’re around on campus, Angelina is currently in Tower 2’

Naturally, the moviestar’s visit wasn’t without anticipated hysteria with some even suggesting that it was the best thing to happen to the university during their study.

‘Angelina Jolie on campus,’ one gushed. ‘I’m finally seing the advantages of going to LSE jk’

Another concurred: ‘Everybody sharing that picture of Angelina Jolie at LSE bc it’s the best bit of being here’ 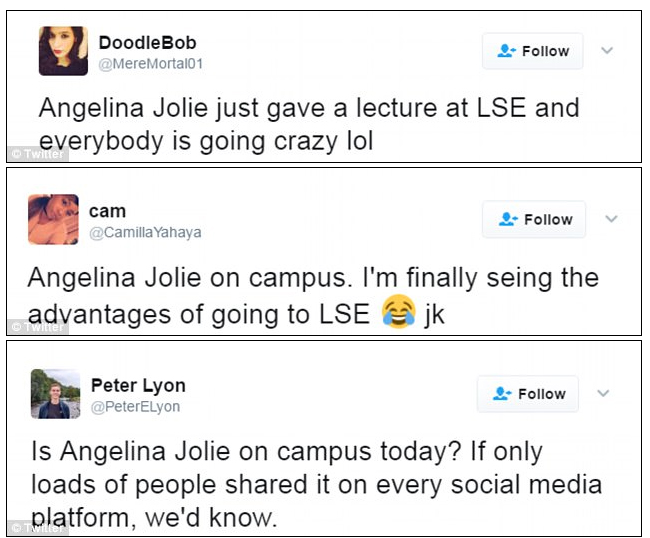 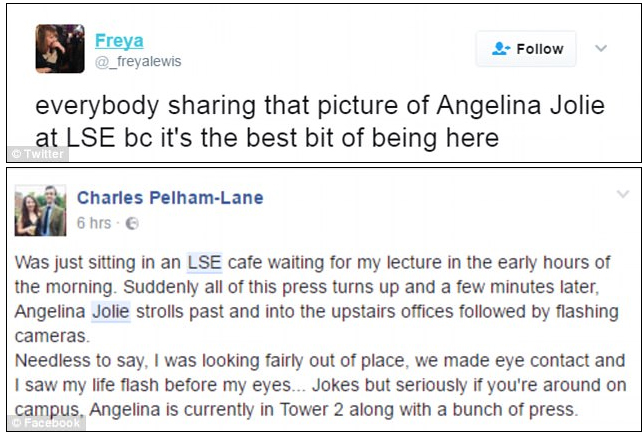 Noticing the student body buzz, one other added: ‘Angelina Jolie just gave a lecture at LSE and everybody is going crazy lol’

The not-so subtle attention Angelina had drawn was not to every student’s taste and another joked: ‘Is Angelina Jolie on campus today? If only loads of people shared it on every social media platform, we’d know.’

Announcing her role back in May, Angelina originally said: ‘I am looking forward to teaching and to learning from the students, as well as to sharing my own experiences of working alongside governments and the United Nations.’

In the unpaid role, Angelina, alongside ex-foreign secretary William Hague, has agreed to teach a minimum of one lecture in the one-term master’s course.

From September, the course will develop students will be able to take an entire master’s – which makes the London School of Economics the first to offer this.

Professor Christine Chinkin, Director of the Centre for Women, Peace and Security, said in a statement issued to MailOnline: ‘I am delighted that LSE postgraduate students have had the unique opportunity to learn directly from the valuable insights, perspectives and experiences that Angelina Jolie brought to the class.’

‘Critical and constructive engagement with this work is at the core of the education programme of the Centre for Women, Peace and Security.’

Previously, Angelina was there to see the centre opened in February 2015 and has therefore been a supporter ever since.

It was Angelina’s humanitarian work that brought her to London from Los Angeles with her six children, at the weekend.

Unsupported by ex-husband Brad Pitt during her visit to the British capital, Angelina has been looking after Maddox, 15, Pax, 12, Zahara, 11, Shiloh, 10, and eight-year-old twins Vivienne and Knox, all by herself.

Angelina filed for divorce from her husband Brad in September 2016 after 10 years together, and confirmed that the family was ‘coping’ after a ‘difficult time’, last month.