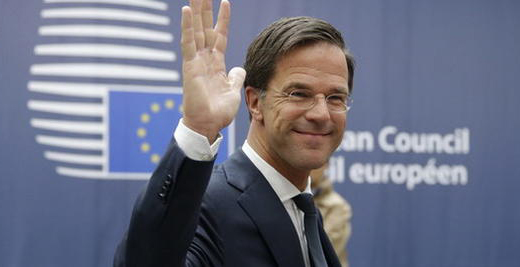 “The Netherlands said ‘Whoa!'” he declared after his centre-right VVD party’s lead positioned him for a third successive term as prime minister, according to the BBC.

With nearly all votes counted, his party easily beat the anti-immigration Freedom party of Geert Wilders.

The Dutch race was seen as a test of support for nationalist parties that have been gaining ground across Europe.

The euro gained as the results pointed to a clear victory for the prime minister’s party.

With 95% of votes counted, the prime minister’s party had won 33 out of 150 seats, a loss of eight seats from the previous parliament.

The Freedom party was in second place on 20 seats, a gain of five, with the Christian Democrats (CDA) and the liberal D66 party close behind with 19 seats each.

The Green-Left party also did well, winning 14 seats, an increase of 10.

The Labour Party (PvdA), the junior party in the governing coalition, suffered a historic defeat by wining only nine seats, a loss of 29.

Turnout was more than 80%, the highest for 30 years, which analysts say may have benefited pro-EU and liberal parties.

“We want to stick to the course we have – safe and stable and prosperous,” Mr Rutte said. 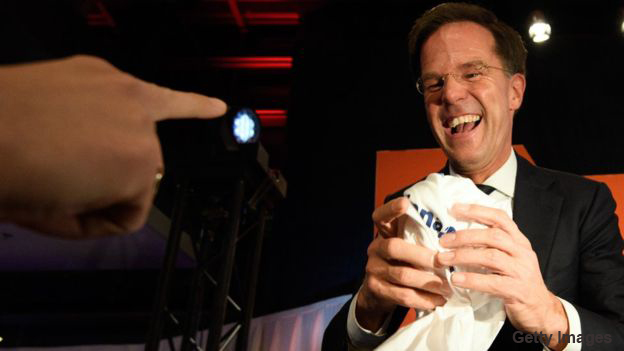 What does this mean for the EU?

France goes to the polls next month to elect a new president, with the far right National Front forecast to increase its vote dramatically.

In Germany, the populist Alternative for Germany (AfD) may win seats in parliament for the first time in September’s general election.

Mr Rutte’s victory was warmly greeted by other European leaders and politicians:

Where does Wilders stand now?

Weeks before the election, opinion polls forecast the PVV winning the biggest number of seats but Mr Wilders’ lead vanished as the vote drew near.

He had pledged to take the Netherlands out of the EU, close all mosques and ban the Koran.

He warned that Mr Rutte had “not seen the last” of him.

“It’s not the 30 seats I hoped for but we have gained seats,” he added. “This patriotic spring will happen.”

How long before a new government is formed?

As parliamentary seats are allocated in exact proportion to a party’s vote share, the VVD will need to go into coalition with three other parties.

The VVD had ruled out a coalition with Mr Wilders’ PVV, but not with the Christian Democrats and D66, which are both pro-EU. It would still be several seats short of forming a government and would need further support from a fourth party.

Coalition talks could take weeks, or even months. 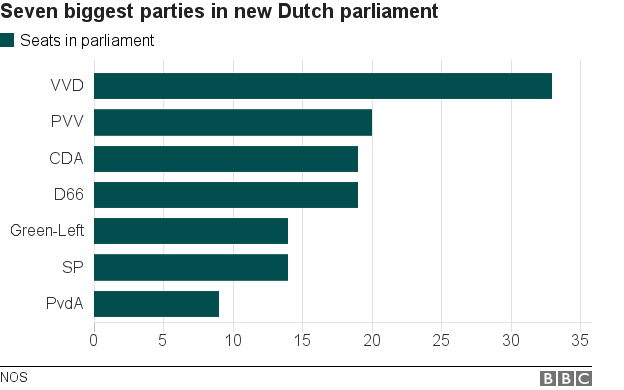