Shares
The four-year-old who famously crashed her dad’s BBC interview has stolen the limelight from her parents yet again. 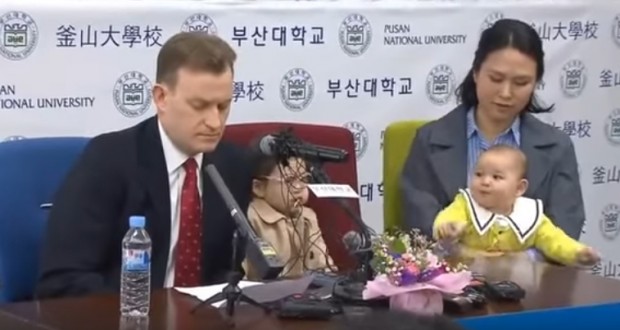 Marion Kelly got dressed up for her first ever press conference, where her dad, Robert Kelly, discussed the hilarious episode that got worldwide attention, Joinfo.com reports with reference to Huffington Post.

“We love our children very much and are happy that our family blooper, our family error, there on television brought so much laughter to so many people,” Kelly said during the conference on Wednesday 15 March.

But naturally, people’s attention was drawn to Marion, who was sucking her lollipop and taking events in her stride. And, quite frankly, looking a little bored.

Kelly said he had thought the BBC interview was a “disaster” and cleared up any concerns that it was a stunt (it wasn’t).

“We were mortified,” he said. “We assumed that no television network would ever call me again to speak.”

But he said he has been “flattered” by the positive reaction.

By the end of the press conference, she wasn’t even at the table.

Watch the press conference below.