Shares
The White House has apologized to the British government after alleging that a UK intelligence agency spied on President Donald Trump at the behest of former President Barack Obama. 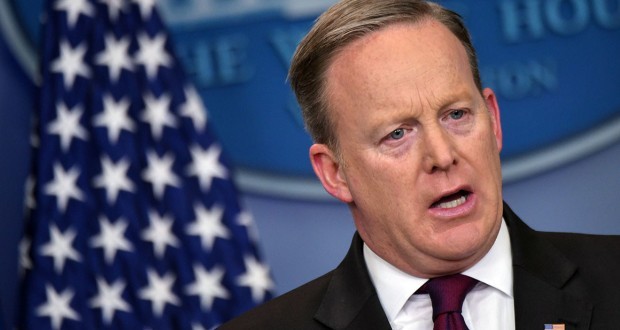 The official described the conversation as “cordial” where McMaster described Spicer’s comment as “unintentional.”

McMaster also told his counterpart that “their concerns were understood and heard and it would be relayed to the White House.”

The official said there was “at least two calls” from British officials on Thursday and that the British ambassador to the United States called Spicer to discuss the comment.

“Sean was pointing to the breadth of reporting, not endorsing any specific story,” the official said.

A senior administration official told CNN that Spicer and McMaster offered what amounted to an apology to the British government.

Earlier Friday, a spokesman for British Prime Minister Theresa May said senior UK officials had protested to the Trump administration after the claims were repeated by Spicer.

“We’ve made clear to the US administration that these claims are ridiculous and should be ignored. We’ve received assurances that these allegations won’t be repeated,” May’s spokesman said.

At a Thursday press briefing, Spicer read out allegations originally made on Tuesday on Fox News by legal analyst Andrew Napolitano, that the UK intelligence agency GCHQ — the equivalent of the US National Security Agency — had spied on Trump.

“Judge Andrew Napolitano made the following statement, quote, ‘Three intelligence sources have informed Fox News that President Obama went outside the chain of command (to spy on Trump). He didn’t use the NSA, he didn’t use the CIA … he used GCHQ,'” Spicer told journalists.

The strong language from Downing Street — which followed a similar, rare statement from the UK intelligence agency GCHQ — indicated that the British government was furious that the US had made such an incendiary allegation.

GCHQ said the claim was “nonsense” and should be ignored. The agency rarely comments on specific operations, and almost never in such blunt terms.

Then, at a regular press briefing, Downing Street said it had sought and received reassurances that the allegations would not be repeated.

“This shows the administration doesn’t give the allegations any credence,” the Downing Street spokesman said. “We have a close special relationship with the White House and that allows us to raise concerns as and when they arise, as was true in this case,” he added.

Britain is particularly sensitive to any suggestion that the US would use GCHQ to keep “American fingerprints” off the spying.

UK intelligence agencies work closely with their US counterparts, as well as those in Canada, Australia and New Zealand, as part of the “Five Eyes” intelligence sharing agreement.

May’s spokesman argued this pact precluded the kind of spying alleged by Napolitano, saying: “I would add as a matter of fact that under the ‘Five Eyes’ intelligence agreement, we cannot use each other’s capabilities to circumvent the law. It’s a situation that simply wouldn’t arise.”

Claims by former NSA contractor Edward Snowden led to questions over GCHQ’s relationship with the NSA. It was censured by a UK tribunal in 2015 for not making enough information public about how it shares Internet surveillance data with its US counterpart.

Susan Rice, national security adviser in the Obama administration, said Spicer’s claims put the intelligence-sharing relationship between the US and UK at risk.”The cost of falsely blaming our closest ally for something this consequential cannot be overstated,” she wrote on Twitter.

Tim Farron, leader of the UK Liberal Democrat party — the junior coalition partner in the last British government — described the White House claim as “shameful” and said it risked harming US and UK security.

“Trump is compromising the vital UK-US security relationship to try to cover his own embarrassment,” he tweeted.

The Senate Intelligence Committee had said on Thursday it had found no evidence Trump Tower had been under surveillance in 2016, contrary to Trump’s previous claims.

“Based on the information available to us, we see no indications that Trump Tower was the subject of surveillance by any element of the United States government either before or after Election Day 2016,” committee chair Richard Burr said.

The same day, US House of Representatives Speaker Paul Ryan told CNN in an interview that he also hadn’t seen any evidence of a wiretap or a surveillance order against Trump Tower.

Trump originally made the allegations against former US President Barack Obama on March 4 in a series of early morning tweets.

“Terrible! Just found out that Obama had my ‘wires tapped’ in Trump Tower just before the victory. Nothing found. This is McCarthyism!” he said on his official Twitter account.

Just under two weeks later, in an interview with Fox News’ Tucker Carlson, Trump appeared to walk back his original wiretapping allegations.

“Wiretap covers a lot of different things,” Trump told Carlson on Wednesday. “I think you’re going to find some very interesting items coming to the forefront over the next two weeks.”