Shares
A man has been shot dead after grabbing a soldier's gun at Orly airport in Paris, French officials say. 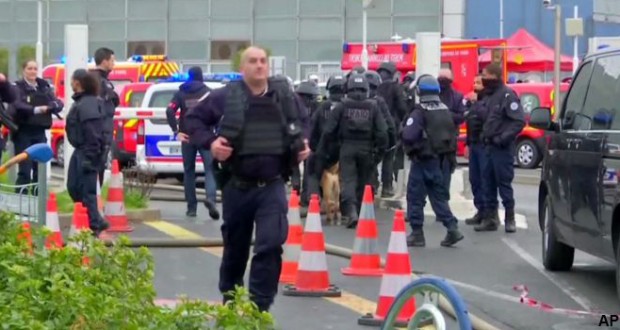 A man was killed by the security forces in a shop after seizing the weapon in the airport’s southern terminal, Joinfo.com reports with reference to the BBC.

The airport has been shut down after what the authorities said was an extremely serious incident and passengers not allowed to disembark.

A security operation is continuing with bomb disposal experts involved and a search for any possible accomplices.

Police also want to make sure the dead man was not wearing an explosive belt.

Police have warned people to stay away from the security cordon put in place and people intending to travel to Orly have been advised to make alternative arrangements.

Officials say the man approached a group of soldiers patrolling the airport and made off with the gun into a shop.

At that point shots were fired and the man was killed.

French Interior Minister Bruno Le Roux is on his way to the scene of the attack.

Witnesses told the AFP news agency that the airport was evacuated soon after the shooting.

“We had queued up to check in for the Tel Aviv flight when we heard three or four shots nearby,” Franck Lecam said.

Meanwhile, a police officer was shot and injured during a vehicle check in the northern suburbs of Paris. The suspect then escaped in a vehicle.

In an incident last month, a man wielding knives lunged at soldiers at Paris’s Louvre museum before being shot and injured.