China urged Rex Tillerson to be ‘cool-headed’ over North Korea 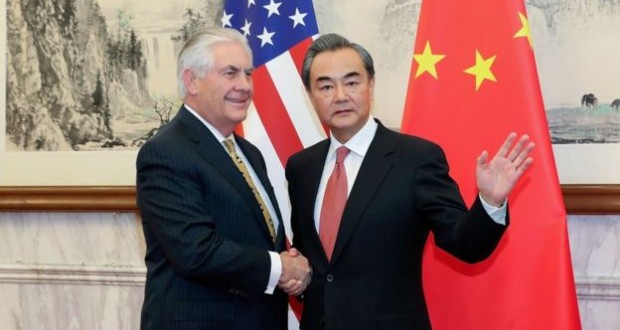 The situation was at a “crossroads”, but must not be allowed to develop into a conflict, he said after hosting US Secretary of State Rex Tillerson, Joinfo.com reports with reference to the BBC.

Mr Tillerson spoke of “dangerous levels” of tension, a day after suggesting the US might launch a pre-emptive strike against North Korea.

North Korea is working to develop nuclear missiles that can reach the US.

Mr Tillerson is in Beijing in the final leg of his East Asia tour, which has been dominated by anxieties over North Korea.

He added that China – Pyongyang’s main ally – had done “little to help”.

North Korea is behaving very badly. They have been “playing” the United States for years. China has done little to help!

Mr Wang defended the Chinese position, saying all parties were duty-bound to implement UN sanctions against Pyongyang, but also to seek dialogue and diplomatic solutions.

“We hope that all parties, including our friends from the United States, could size up the situation in a cool-headed and comprehensive fashion and arrive at a wise decision,” Mr Wang said.

Mr Tillerson did not repeat his threat in Beijing, but stressed that the US and China shared “a common view that tensions on the peninsula are quite high right now – and that things have reached a rather dangerous level”.

He added, however, that they had both committed “to do whatever we can to prevent any kind of conflict breaking out”.

The US has deployed its Terminal High-Altitude Area Defense system (Thaad) in South Korea in a move it says is designed to protect against threats from North Korea.

But China has claimed the system goes “far beyond” the defence needs of the Korean peninsula.

Mr Tillerson, a former oil executive with no prior diplomatic experience, will meet Chinese President Xi Jinping on Sunday.

Mr Xi is scheduled to visit the United States next month for his first meeting with President Trump.

Some commentators expect Mr Tillerson to downplay any tensions between the two countries ahead of that encounter.