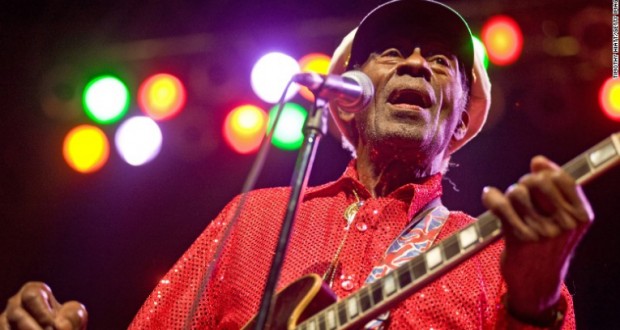 Chuck Berry, a music pioneer often called “the Father of Rock ‘n’ Roll,” died Saturday at his home outside St. Louis, his verified Facebook page said. He was 90.

A post on the St. Charles County police Facebook page said officers responded to a medical emergency at the residence around 12:40 p.m. (1:40 p.m. ET) Saturday and found an unresponsive man inside. Resuscitation efforts failed, according to CNN.

Berry wrote and recorded “Johnny B. Goode” and “Sweet Little Sixteen” — songs every garage band and fledgling guitarist had to learn if they wanted to enter the rock ‘n’ roll fellowship.

Berry took all-night hamburger stands, brown-eyed handsome men and V-8 Fords and turned them into the stuff of American poetry. By doing so, he gave rise to followers beyond number, bar-band disciples of the electric guitar, who carried his musical message to the far corners of the Earth.

Some of his most famous followers praised him on social media.

The Rolling Stones posted on their website: “The Rolling Stones are deeply saddened to hear of the passing of Chuck Berry. He was a true pioneer of rock ‘n’ roll and a massive influence on us. Chuck was not only a brilliant guitarist, singer and performer, but most importantly, he was a master craftsman as a songwriter. His songs will live forever. ”
But it was perhaps John Lennon — who died in 1980 — who put it most succinctly. “If you tried to give rock and roll another name, you might call it ‘Chuck Berry.'”

The list of Berry’s classics is as well-known as his distinctive, chiming “Chuck Berry riff”: “Maybellene.” “Around and Around.” “Brown-Eyed Handsome Man.” “School Days.” “Memphis.” “Nadine.” “No Particular Place to Go.”

They were deceptively simple tunes, many constructed with simple chord progressions and classic verse-chorus-verse formats, but their hearts could be as big as teenage hopes on a Saturday night.

His music even went into outer space. When the two Voyager spacecrafts were launched in 1977, each was accompanied on its journey to the outer reaches of the solar system by a phonograph record that contained sounds of Earth — including “Johnny B. Goode.”