Home / World / ‘That’s not how it works’: Trump’s grasp of Nato questioned

‘That’s not how it works’: Trump’s grasp of Nato questioned

Shares
President’s claim that Germany owes the US ‘vast sums of money’ shows a lack of understanding, says ex-Nato representative 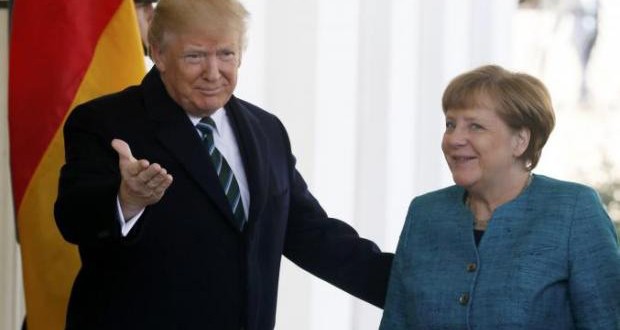 On the heels of a visibly awkward visit from the German chancellor, Angela Merkel, Donald Trump said on Saturday that Germany owed “vast sums of money” to Nato and the US, even though the alliance does not stipulate payments to America, Joinfo.com reports with reference to The Guardian.

His remarks prompted a former US permanent representative to Nato to reply “that’s not how Nato works”, and to add that increased European spending on defense was not a “favor (or payment) to the US”.

Trump, who was at his Mar-a-Lago estate for the weekend and spending the morning at Trump International Golf Course, sent two tweets early in the day. The first denounced “the FAKE NEWS” for what he said was mistaken coverage of a “GREAT” meeting with Merkel.

Despite what you have heard from the FAKE NEWS, I had a GREAT meeting with German Chancellor Angela Merkel. Nevertheless, Germany owes…..

…vast sums of money to NATO & the United States must be paid more for the powerful, and very expensive, defense it provides to Germany!

Trump’s public appearances with Merkel betrayed an awkwardness between the two leaders, including during two widely remarked upon appearances in the White House. In one, the leaders failed to stage a handshake for cameras in the Oval Office, and in another Merkel looked baffled by comments made by Trump during a joint press conference. Before the visit Trump had repeatedly called Merkel’s policies “insane” and a “disaster” for Germany.

In a joint press conference on Friday, Trump expressed “strong support” for Nato but reiterated his belief that member nations do not contribute a “fair share”.

“Many nations owe vast sums of money from past years and it is very unfair to the United States,” he said. “These nations must pay what they owe.”

He added: “During our meeting, I thanked Chancellor Merkel for the German government’s commitment to increase defense spending and work toward contributing at least 2% of GDP.”

Trump’s tweets on Saturday suggested a misunderstanding of the way Nato is funded. According to Nato’s official guidelines, member nations are expected to spend at least 2% of their country’s gross domestic product (GDP) on defense. However, only a handful of the 28 members actually meet that target.

At a 2014 summit in Wales, members pledged to increase their military spending to 2% of GDP by 2024, a goal some have said is unachievable and unrealistic for several member states.

Ultimately, members’ contributions are based on each nation’s capability. Therefore, Nato member nations do not “owe” or have to compensate any other country.

On Saturday Ivo Daalder, who was permanent representative to Nato from 2009 to 2013, respond to Trump in a series of tweets.

“Sorry, Mr President, that’s not how Nato works,” he wrote. “The US decides for itself how much it contributes to defending Nato. This is not a financial transaction, where Nato countries pay the US to defend them. It is part of our treaty commitment.

“But no funds will be paid to the US. They are meant to increase Nato’s overall defense capabilities, given the growing Russian threat. Europe must spend more on defense, but not as favor (or payment) to the US. But because their security requires it.”

Daalder added that the “large military commitment” of the US to Nato was “not a favor to Europe” but was “vital for our own security”.

“We fought two world wars in Europe, and one cold war,” he wrote. “Keeping Europe whole, free, and at peace, is vital US interest.”

Trump has long criticized Nato. In a joint interview days before taking office in January, with the Times of London and the German publication Bild, Trump declared the alliance “obsolete”.

“I said a long time ago that Nato had problems,” he said. “No1 it was obsolete, because it was designed many, many years ago. No2 the countries weren’t paying what they’re supposed to be paying.”

In an interview with the New York Times editorial board, Trump implied that US defense of a Nato ally would depend on whether the country was contributing proportionally to the alliance’s defense spending.

Asked whether the US would provide military defense to Baltic countries if Russia were to attack, Trump said: “If they fulfill their obligations to us, the answer is yes.”

Pressed on what course of action he would take if the answer were no, Trump said: “Well, I’m not saying if not,” he said. “I’m saying, right now there are many countries that have not fulfilled their obligations to us.”