Shares
Sotheby’s will auction the Pink Star diamond in Hong Kong this April, more than three years after its previous sale fell through. 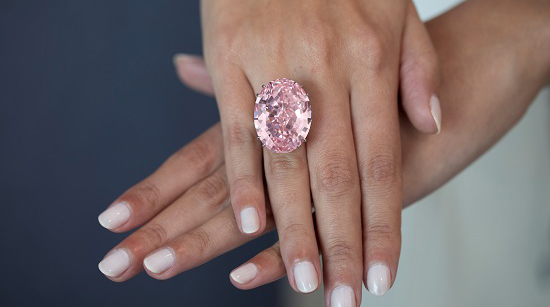 The oval, 59.60-carat, internally flawless, fancy vivid pink diamond is expected to exceed $60 million at the Sotheby’s auction, which would rank it among the most valuable diamonds ever sold, Joinfo.com reports with reference to Rappaport.

“At a time of unprecedented demand for the finest in colored diamonds, I am delighted to be bringing this magnificent stone back to the market,” said David Bennett, chairman of Sotheby’s jewelry division. “The extraordinary size of this 59.60-carat diamond, paired with its richness of color, surpasses any known pink diamond recorded in history.”

The Pink Star is the largest internally flawless, fancy vivid pink diamond ever graded by the Gemological Institute of America, according to Sotheby’s. It’s more than twice the size of the 24.78-carat Graff Pink, which set the current record price for a pink diamond when it sold for $46.2 million in 2010, the auction house added.

The Pink Star surpassed the Graff Pink in November 2013 when Sotheby’s sold it to diamond cutter Isaac Wolf for a record $83.2 million. However, the stone was returned to Sotheby’s after Wolf and his investors defaulted on the payment.

Sotheby’s entered into a partnership agreement in June last year with Diacore and Mellen Diamonds, both New York-based diamond manufacturers, for shared ownership of the diamond. The Pink Star has been held in Sotheby’s inventory at a value of $72 million.

The diamond will be on display at the Hong Kong Convention and Exhibition Centre from March 29 to April 3 before going under the hammer on April 4.