Shares
A woman has died on Westminster Bridge in central London in what police are treating as a terrorist incident. 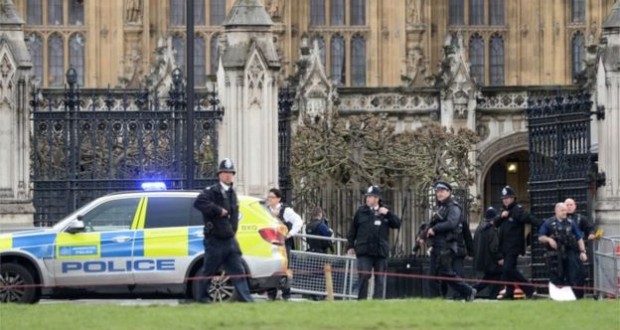 A police officer was also stabbed in the nearby Houses of Parliament by an attacker, who was shot by police, according to the BBC.

Several pedestrians were struck by a car on the bridge, before it crashed into railings.

Police said there were “a number of casualties… including police officers” and a “full counter-terrorism inquiry” was under way.

Speaking outside Scotland Yard he urged the public to stay away from the area around Westminster to allow emergency services access.

London Ambulance said it had treated at least 10 people on Westminster Bridge.

The Port of London Authority said a woman has been pulled alive from the River Thames near the bridge and was being treated for serious injuries.

Junior doctor Colleen Anderson from St Thomas’ Hospital confirmed the death of the woman and said a number of other people were hurt – some with “catastrophic” injuries.

She said she also treated a police officer in his 30s with a head injury, who had been taken to King’s College Hospital.

She said the woman had died at the scene.

“There were people across the bridge. There were some with minor injuries, some catastrophic,” she added.

“Some had injuries they could walk away from or who have life-changing injuries. There were maybe a dozen [injured].”

The incident outside Westminster, while at this stage unclear, is the kind of scenario security chiefs have been planning for.

Just last week there was a major counter-terrorism exercise on the River Thames as part of plans to prepare for the worst.

What’s not clear is whether this incident was anything that could have been foreseen.

But the fact that the Metropolitan Police’s counter-terrorism armed response swung into action so quickly indicates how much work has been done since the killing of Lee Rigby in 2013.

Scotland Yard’s counter-terrorism command, MI5 and, where relevant, other major agencies, will throw absolutely everything at trying to establish the background of the suspect – whether they were working alone or whether there could be more of the same on the way.

And while they are treating this as a terrorist incident, they will know full well they will have to test the evidence to ensure this theory is correct.

MPs said they had heard three or four gunshots and staff inside Parliament were told to stay inside their offices.

Shortly after the incident, a Downing Street source confirmed that Mrs May was safe.

The prime minister was seen being ushered into a silver Jaguar car as what sounded like gunfire rang out at Parliament during the incident.

Parliament was put into lockdown shortly after the attack at 14:40 GMT.

Tom Peck, political editor for the Independent, tweeted: “There was a loud bang. Screams. Commotion. Then the sound of gunshots. Armed police everywhere.”

“I heard shouts and screams from outside and looked out, and there was a group of maybe 40 or 50 people running round the corner from Bridge Street into Parliament Square.

“They appeared to be running away from something.

“As the group arrived at the Carriage Gates, where policemen are posted at the security entrance, a man suddenly ran out of the crowd and into the yard.

“He seemed to be holding up a long kitchen knife.

“I heard what sounded like shots – I think about three of them – and then the next thing I knew there were two people lying on the ground and others running to help them.

“Armed police were quickly on the scene and I heard them shouting to people to get out of the yard.”

An eye witness, Radoslaw Sikorski, a senior fellow at Harvard’s Centre for European Studies, posted a video to Twitter showing people lying injured in the road on Westminster Bridge.

He wrote: “A car on Westminster Bridge has just mowed down at least 5 people.”

Scotland Yard said it was called to a firearms incident on the bridge amid reports of several people injured.

Transport for London said Westminster underground station has been shut at the police’s request, and buses diverted.

Mr Lidington said: “It seems that a police officer has been stabbed, that the alleged assailant was shot by armed police.

“An air ambulance is currently attending the scene to remove the casualties.

“There are also reports of further violent incidents in the vicinity of the Palace of Westminster but I hope colleagues on all sides will appreciate that it’d be wrong of me to go into further details until we have confirmation from the police and from the House security authorities about what is going on.”