Shares
Four people have died and 20 people have been injured after what police are treating as terrorist attacks in Westminster, earlier on Wednesday. Here is what we know so far. 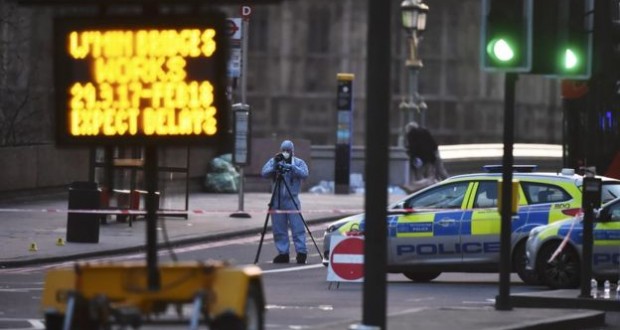 At 14.40 (GMT) the Metropolitan Police were called to an incident around Parliament Square in central London, according to the BBC.

Reports made to the police included a person in the river, a car hitting pedestrians and a man armed with a knife. 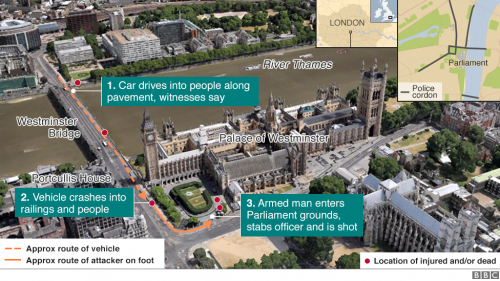 Witnesses saw a car drive across Westminster Bridge and hit a number of pedestrians walking on the pavement.

These included three police officers who were walking across the bridge on their way back from a commendation ceremony.

Four university students from Edge Hill University, in Ormskirk, Lancashire, who were on a two-day educational trip to the Houses of Parliament, were also injured in the attack.

A group of French schoolchildren were also on the bridge and three were injured in the incident.

French Prime Minister Bernard Cazeneuve tweeted his support to the British as well as to “the French students wounded, their families and their schoolmates”.

The car then crashed into railings outside the Houses of Parliament.

Acting Deputy Commissioner for the Metropolitan Police Mark Rowley said two people had died after the incident on the bridge and 20 people had been injured.

A spokesperson from Guy’s and St Thomas’ NHS Foundation Trust said they was treating two patients – a man and a woman – and both were in a stable condition.

Shortly after the incident on the bridge, a police officer was stabbed in the grounds of the Houses of Parliament. The attacker was then shot.

The BBC has been told that an MP gave mouth-to-mouth resuscitation for 15 minutes “but sadly the officer died”.

Acting Deputy Commissioner Rowley confirmed the armed officer had died, as well as a man they believed to be the attacker.

He told a press conference he believed there to be only one attacker, but searches were ongoing.

Parliament has been suspended for the rest of the day and politicians, journalists and visitors to the buildings were locked in for about five hours.

Just after 17:00 GMT, a woman was pulled from the River Thames alive, but with injuries.

Commander BJ Harrington of the Metropolitan Police, the senior national co-ordinator at the Met, has declared the events as terrorist incidents.