The Sun Has Been Spotless For More Than 15 Days Now 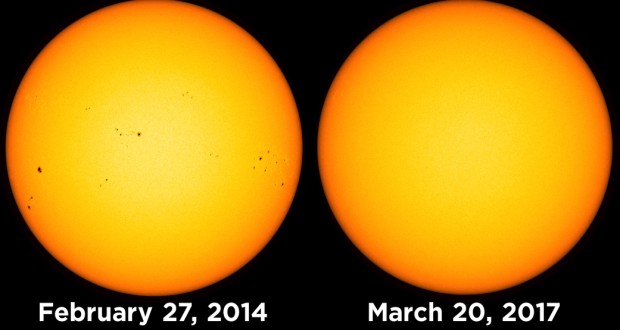 This is the longest stretch of spotlessness since the last solar minimum in April 2010, indicating the solar cycle is marching on toward the next minimum, which scientists predict will occur between 2019—2020.

The sun goes through a natural 11-year cycle marked by two extremes: solar maximum and solar minimum. Sunspots are dark regions of complex magnetic activity on the sun’s surface, so the number of sunspots at any given time is used as an index for solar activity. Solar maximum is characterized by intense solar activity and the greatest sunspot number. Conversely, during solar minimum, the sun is least active and sunspot number is at its lowest. Solar activity, however, does not end as sunspot number decreases toward minimum. There are other sources of solar activity such as high-speed streams of solar material from coronal holes, which spark aurora and other space weather effects.

The SDO images here compare the sun on March 20, 2017, and February 27, 2014, during the last solar maximum when the sun sported numerous spots.