Shares
Scientists have published details of the world's biggest dinosaur footprints, found in Western Australia, with the sauropod prints measuring a whopping 1.7 metres. 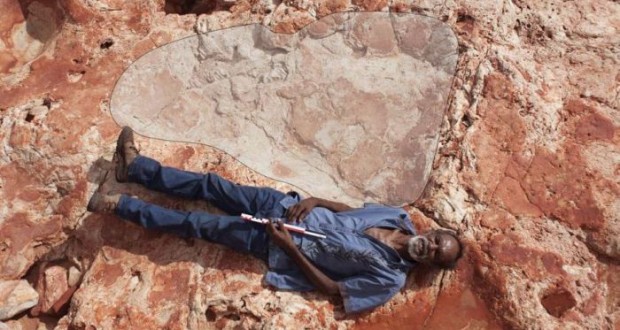 The scientific description of the 1.7-metre footprints has been published by University of Queensland vertebrate palaeontologist Steve Salisbury, in the Memoir of the Society of Vertebrate Paleontology, after a two- to three-year peer review process.

The footprints were found on the north-western coast of Western Australia, where Dr Salisbury’s research project has revealed the journeys of dinosaurs up and down the coast.

“We’ve got several tracks up in that area that are about 1.7 metres long,” Dr Salisbury said.

“So most people would be able to fit inside tracks that big, and they indicate animals that are probably around 5.3 to 5.5 metres at the hip, which is enormous.”

The dinosaur that left the prints on what is now sandstone rock platforms, on a remote coastline north of Broome, was the largest member of the sauropods, which includes well-known dinosaurs such as the brontosaurus.

“At first it would seem a footprint that size and an animal that big, is it scientifically possible?” Dr Salisbury said.

“These animals did exist. They were out there and we’re seeing evidence of them having existed in the Kimberley 130 million years ago based on these tracks.”

Big prints and lots of them

The 1.7-metre footprints are easily the biggest discovered, and their sheer size meant they were initially overlooked.

“Probably the next biggest footprints are just over a metre,” Dr Salisbury said.

“Some of them are so big we didn’t really notice them for some time because they’re sort of beyond your search image for a dinosaur track.”

More remarkable to scientists is that the world’s biggest footprints are just one type of about 21 different kinds of dinosaur footprints in the area.

“With 21 different types of tracks represented, that makes it the most diverse dinosaur footprint fauna in the world,” Dr Salisbury said. 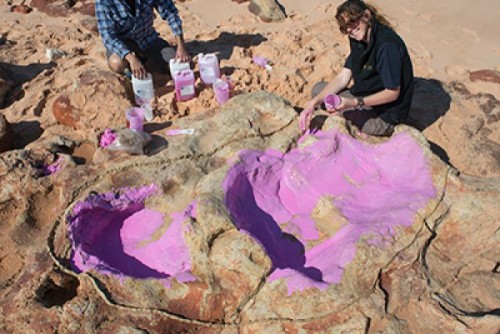 The area was a large river delta 130 million years ago, with dinosaurs crossing wet sandy areas between surrounding forested areas.

The challenge for palaeontologists will now be interpreting such a wealth of footprints.

“There are huge areas around that coastline where all you can see are dinosaur tracks,” Dr Salisbury said.

“They’ve just been churned up by dinosaurs, the same as what you see around a dam when a lot of cattle and sheep and kangaroos have come in and made a mess of the mud.”

Dr Salisbury started studying dinosaur footprints on the coast north of Broome when the James Price Point area, known as Walmadan to traditional owners, was listed for development into a gas processing facility.

“Dinosaur tracks have been known through that area, probably for thousands of years. They form part of the song cycle,” he said.

“When the area was selected as the site for a liquid natural gas processing precinct, it was assumed there was nothing there.

“This is where we got contacted to come in and have closer look, and it didn’t take long for us to realise that … there was a spectacular dinosaur track fauna preserved there that was at risk.”

The development did not proceed when Woodside Petroleum determined gas processing at the site would not be economically feasible.

The area has also gained National Heritage listing, and Dr Salisbury hopes his work will attract interested people to visit the area and see the world’s biggest dinosaur footprints with Indigenous traditional owners.

“In the future probably the best way for people to see what’s at Walmadan is to do it on country through something like the Lurujarri Heritage trail,” Dr Salisbury said.

“So spend time walking through there, learning the stories and seeing things as they come up during that walk.”